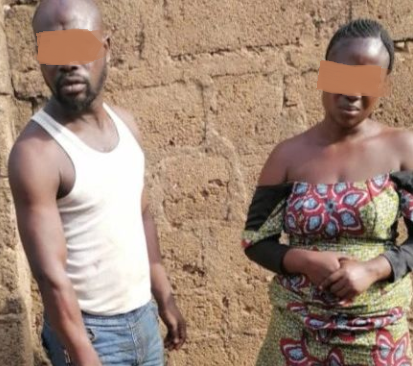 A couple who were arrested with fresh human parts in Ogun State has turned against each other while confessing to the crime during police interrogation.

According to PUNCH, Kehinde Oladimeji, 43, and his 35-year-old wife, Adejumoke, were arrested on Saturday with body parts of yet-to-be-identified victim in their apartment at 72, MKO Abiola way, Leme, Abeokuta.

They were paraded on Monday at the police command headquarters, Eleweran, Abeokuta.

While speaking to newsmen, the husband claimed that the victim is his wife’s friend whom she had independently killed, dismembered before they sold her head to his friend for the sum of N70,000.

According to him, the victim’s head was sold to a merchant, identified as Omo Baale, a resident of Ibadan, Oyo State.

However, the wife debunked his statement by accusing him of trying to fame her up.

“I know nothing about it; stop framing me up,” she said, adding that her husband’s friend, one Michael, handed over a sack to them, which they later discovered contained human parts after three days.

Meanwhile, Kehinde said, “There was a day my wife invited her friend, a lady, to our house for a visit. The first time she came was a Tuesday; she came that particular day and went back home.

“But the second day she came, it was on a Thursday. My wife on that day cooked noodles and eggs for the lady, which she ate. Later, the lady went into the bathroom and showered.

“But when it was getting dark that day, I inquired from my wife when her friend would leave, but my wife said the lady said she was weak and she would need to lie down and regain her strength. I was sitting in the backyard, but when I returned to the room, I realised that my wife had killed her friend and dismembered her.

“When I asked her what happened, she told me her friend offended her a long time ago. The person who bought the head came from Ibadan. His name is Oluomo.

“I have a friend in Ibadan, who is popularly known as Omo Baale. He told me he needed a human head, but I told him I didn’t have the connection of anybody who could help facilitate it. My wife heard the discussion and asked me how much the man would pay for it (human head) and I told her he was ready to pay N70,000. I never knew my wife had made up her mind.

“As you can see, I’m not a strong person. When the incident happened, I wanted to kill myself.”

Share
Facebook
Twitter
Pinterest
WhatsApp
Previous articleWe’ve Asked God To Bring Tinubu Down, He Doesn’t Mean Well For Us – Aregbesola
Next articleIt Took Me 36 Years Journey To The Throne, The Shortest In The History of Olubadans, I’ll Move To Oke Aremo Palace When Ready — Olubadan-Designate