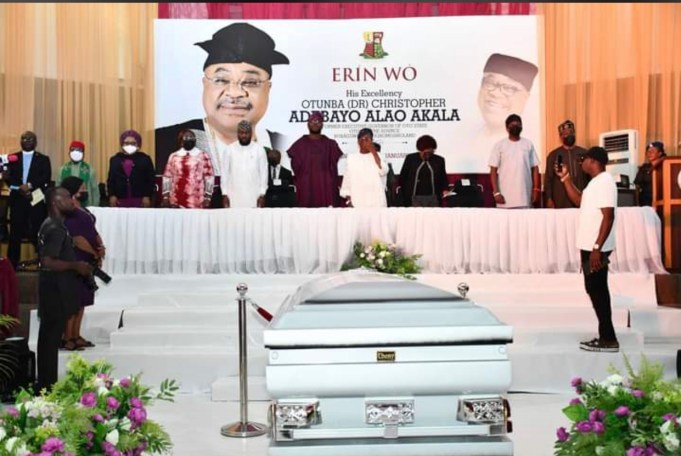 Oyo State Governor, ‘Seyi Makinde, on Wednesday, eulogised the late former governor of the state, Otunba Adebayo Alao-Akala for what he described as his immense contributions to the development of Oyo State.

Makinde, spoke through his deputy, Engineer Rauf Olaniyan, during the Lying-in-State Ceremony held in honour of the former governor by the State Government, at the House Chiefs, Parliament Building Agodi Secretariat, Ibadan.

A statement by the Chief Press Secretary to the governor, Mr. Taiwo Adisa, quoted him as lauding the contributions of the late Alao-Akala to the development of the state and the political circle.
He explained that the state government would continue to support the family he left behind, especially at this trying period.

In his personal remarks, the Deputy Governor, while describing late Alao-Akala as a person with a large heart said he governed the state with absolute fear of God and served the state meritoriously to the best of his capacity.

Also, the Speaker of the Oyo State House of Assembly, Rt. Hon. Ogundoyin described the late Alao-Akala as a thoroughbred politician, a team leader, a community man, and a grassroot mobilizer in all ramifications.

He said: “Our late former governor was no doubt a great leader. His benevolence, love for the people coupled with his all-inclusive and encompassing political ideology gave him large followership and undoubtedly made him one of the most accessible, approachable and celebrated political leaders in Oyo State.

“The late Otunba Alao-Akala unequivocally etched his name in gold and made indelible marks as the Governor of Oyo State between 2007 and 2011. He was the people’s governor and the Oyato Governor,” Ogundoyin added.

Similarly, the Chief Judge of Oyo State, Justice Muntar Abimbola, who was represented by Justice Iyabo Yerima, also eulogised the late former governor for implementing programmes that allowed the judicial arm of government operate as an independent arm.

The event had in attendance: the Deputy Governor, the Speaker, representative of Chief Judge of the State, Justice Iyabo Yerima, former Deputy Governors of Oyo State, Ambassador Taofeek Arapaja and Barr. Iyiola Oladokun, Secretary to the Oyo State Government, Mrs. Olubamiwo Adeosun, Chief of Staff, Hon. Segun Ogunwuyi, among others.