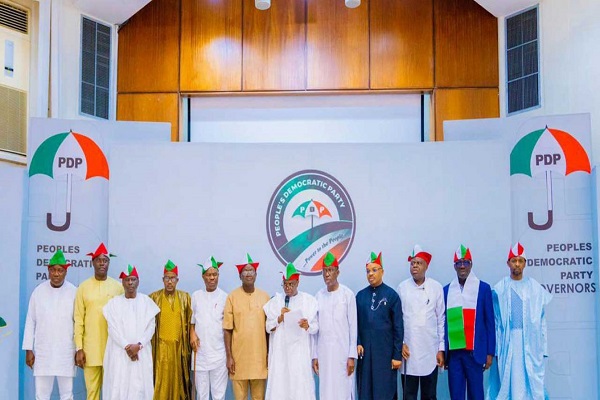 Disagreement among Peoples Democratic Party (PDP) Governors Forum has deepened as the 13-member Forum split over zoning of the party’s 2023 presidential ticket.

The Nation gathered yesterday that eight of the Forum’s governors from the South are sticking to their guns that the ticket be zoned to the South.

However, four of the five governors from the North are said to be resisting the move, insisting that the North should retain the ticket.

In the alternative, they have canvassed an open contest for the ticket in the hope of taking advantage of the higher number of delegates from the 19 states in the North.

Party sources told our correspondent that the Southern governors’ position is hinged on the resolution of the Southern Governors Forum that the Presidency must shift to the South in 2023.

Being signatories to the Southern Governors Forum’s position on power shift, the southern PDP governors are said to have resolved to stick to the resolution.

A party source close to the PDP Governors Forum confided in our correspondent that the issue has continued to divide the ranks of the governors.

The source, who did not want to be quoted because he is not authorised to speak on the matter, said the eight governors from the South have continued to maintain that they cannot go back on the resolution on power shift.

According to the source, it has become difficult for the southern governors to convince the electorate in their respective states why the ticket should be zoned to the North.

“The matter is made more difficult for the southern governors in view of the fact that President Muhammadu Buhari who is from the North, will be serving out his two terms of eight years in 2023.

“Now, how will these governors face their people and tell them that they have agreed to the zoning of the party’s 2023 presidential ticket to the North again.

“Obviously, that would amount to a repudiation of the resolution of the 17 Southern Governors Forum which they individually and collectively subscribed to. That resolution is binding on them”.

The Southern Governors Forum, chaired by Ondo State Governor Rotimi Akeredolu, had, during separate meetings of the Forum, insisted that equity, justice and fairness dictate that the Presidency should move to the South.

It was gathered that the PDP northern governors may have initiated moves to stave off the onslaught by their southern counterparts.

One of such moves is for them to work on the party structures in the 19 Northern states with a view to winning all the delegates from the region ahead of the PDP presidential primaries.

However, there is also a division in the ranks of the Northern PDP governors over the reported presidential aspirations of two of them.

Bauchi State Governor Bala Mohammed and his Sokoto State counterpart, Aminu Tambuwal, are believed to be eyeing the ticket. But their effort in this regard is being challenged by the aspiration of former Vice President Atiku Abubakar who is also in the race for the party’s ticket.

Similarly, there seems to be no common position among the Southern PDP governors regarding the presidential ticket as three of them are believed to be interested in the slot.

Governors Nyesom Wike (Rivers); Ifeanyi Okowa (Delta); and Ifeanyi Ugwuanyi (Enugu) are being speculated to be interested in the ticket.

They are said to be waiting for the leadership of the PDP to take a definite position on zoning before they would make their aspiration public. Ongoing consultations among the various party organs and key party stakeholders have failed to resolve the zoning conundrum.

The Dr. Iyorchia Ayu-led National Working Committee (NWC) has continued to maintain that the PDP has not taken any decision on the zoning of the ticket.

The party leadership has been insistent that no action has been taken on the report of the Bala Mohammed committee which recommended the jettisoning of zoning.