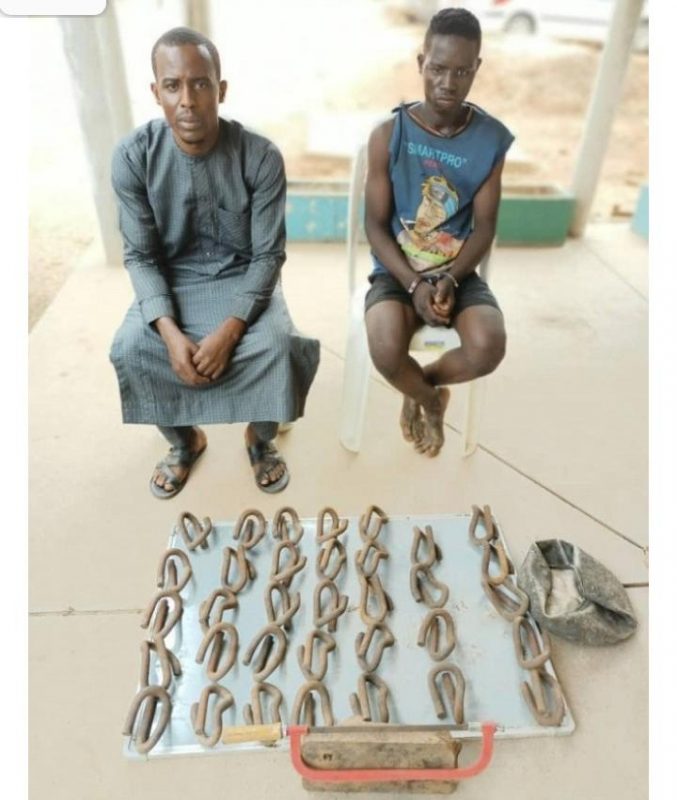 Two suspects who are believed to have caused the forceful stoppage of trains on railways last weekend, have been arrested by the Oyo State Police Command.

The suspected vandals identified as Ibrahim Saidu (20) and Muritala Abdulahi (30), were caught in the sale of railroad clips known as Pandrol.

Confirming the arrest on Monday, the State Police Public Relations Officer, SP Adewale Osifeso, said that the suspected vandals were apprehended last Friday at about 6:30 pm while in the act at Ile-Esho Area, Omi-Adio in Ido Local Government Area.

He said that the arrest was made possible by the surveillance carried out by operatives attached to Omi-Adio Divisional Police Headquarters.

The recovered items are 34 railroad clips, a fish plate, a hacksaw and a damaged rail pot.

According to the PPRO, the suspects confessed to the crime and had been cooperating with ongoing investigations aimed at arresting other members of the gang.

The Police Command has therefore urged members of the public to provide timely information which would enable the police to curb all crimes and prevent future occurrences.

Recall that Oyoaffairs.net had reported last Saturday that passenger aboard a train were gripped with fear after the vessel was forced to stop in the middle of a bush, due to the activities of vandals on the Lagos-Ibadan railway track.

The temporary stoppage was sorted out later with the help of armed security agents on board together with the technicians who fixed the damaged track.