Home NEWS People in South-West Would Have Been Trekking, if I Hadn’t Intervened –...
Facebook
Twitter
WhatsApp
Telegram 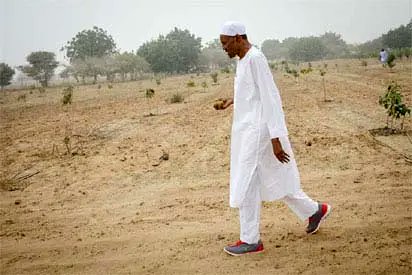 President Muhammadu Buhari, has again praised himself, saying that if he had not intervened in Lagos-Ibadan transport projects, “people would’ve been trekking from Lagos to Abuja” The Vanguard reports.

Buhari who on Tuesday said prioritizing infrastructure projects ameliorated hardship in some parts of the country, particularly the quick intervention on the Lagos-Ibadan route with completion of road and rail lines, which improved the traffic significantly.

“My objective was very clear, despite the dwindling resources, I wanted to deal with infrastructure across the country,’’ the President told a delegation from Kaduna State, led by the Emir of Zazzau, Alhaji Ahmed Nuhu Bamalli, and Kaduna State Deputy Governor, Hadiza Sabuwa Balaraba at the State House.

“We should look at advancement in terms of Infrastructure. No country can advance without infrastructure. There used to be railways, especially people from Southern Kaduna will remember this.

The President said the challenge of commuting in the South West had been improved.

“The people from South West can tell better because between Lagos and Ibadan by now, if we hadn’t done what we did, people would have been trekking because the road was not there, the rail was not there and there was so much insecurity.

“But we thank the international community. We thank China and Chinese investors, who came along to support the Lagos-Ibadan transport projects,’’ he said.

A statement by Femi Adesina, Special Adviser to the President, Media & Publicity, had Buhari saying that the construction and rehabilitation of infrastructure will be sustained.

The President commended the Governor of Kaduna State, Nasir el-Rufai, for the transformation of the state, with growing infrastructure and socio-economic projects, while noting the growing liberality, which welcomes all Nigerians.

“Please extend my gratitude to the Governor for doing so well. I have been living in Kaduna for many years before I came here, but now I will need a modern compass to go around because of the transformation,’’ he added