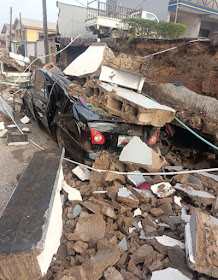 Residents of Ibadan, the Oyo State capital, on Friday witnessed the first major rain which started at 5.30 pm with heavy winds and strong downpour, the News Agency of Nigeria (NAN) reports.

NAN reports that the downpour caused minor damages to some weak structures of houses fenced with corrugated sheets and wood.

NAN reports that due to the downpour, some residents illegally disposed of their waste into the waterways, thereby blocking the gutters and waterways and hindering the free flow of water.

Also, some roads were littered with dirt as the rain overflowed to the roads due to clogged drainages.

Some commuters took to the roads as the rain reduced its force at about 7.00 p.m. causing traffic gridlock on the major roads.

Mrs Alice Aborishade said it was imperative for residents to stop the habit of clogging waterways, so as to avert flooding.

“Let everyone take a cue from the past and stop the act of pouring dirt into waterways when it rains,” Aborishade said.

A community leader, Mr Akin Amao, said the rain would help reduce heat being experienced and will bring comfort to all and sundry.

“I am sure farmers will be delighted as it has rained and it will help their preparation for farming this year.

“We need rain to be normal so that food prices will crash,” Amao said.

Mr Mayowa Oluyinka said as most gutters are now blocked, it will require some shop owners to do extra work of clearing the dirt in the morning.

“We must ensure a clean environment to be free of health hazards and outbreak of diseases, especially now that the outbreak of Lassa Fever has been reported in the state. We must ensure that we are safe from whatever that could be harmful,” Oluyinka said. (NAN)