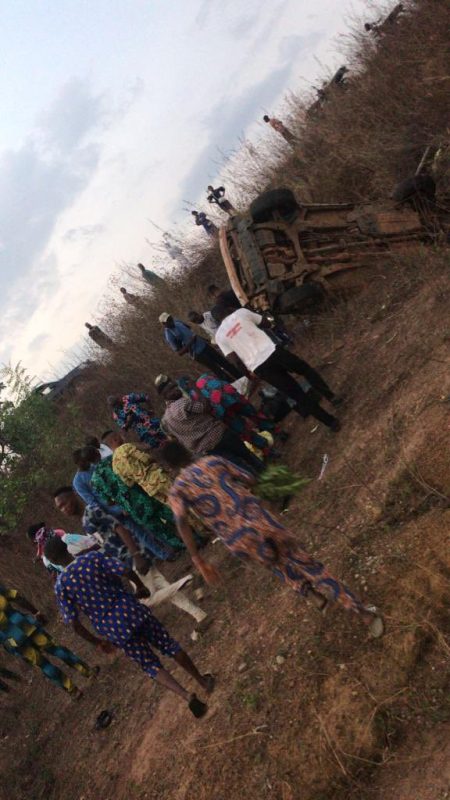 It was a sad scene on Saturday evening along Busari, Oyo-Ogbomoso expressway after a family of six were involved in a fatal accident, which instantly claimed the lives of two adults.

Narrating the incident, a Twitter user, Taiwo Alabi @taiwoalabiho2 whose brother was at the scene of the accident explained that the family of six were travelling in a Toyota Highlander SUV, on their way to Lagos after a party from Ilorin when the incident happened.

It appeared that the car had somersaulted from a bend into a nearby bush.

Unfortunately, two persons died immediately while the remaining four including a baby were rescued by passersby who alerted the police and men of FRSC.

According to the eyewitness, the baby girl was found on her dead mother unhurt.

A few hours ago, another Twitter user who is a student, Ademola Adedamola @Felzqueen, seeing the thread commented that the dead woman on which the surviving baby was found was her dad’s younger brother’s wife.

Meanwhile, Many Twitter users especially Students of Unilorin and LAUTECH have condemned how narrow and sloppy the Oyo-Ogbomoso Expressway is, adding that it is a death trap coupled with the presence of heavy-duty trucks and terrible bends on the road.

While expressing their condolences to the bereaved, many have appealed to the Honourable Minister of Works and Housing, Babatunde Raji Fashola, SAN and the Federal Government to urgently hasten up the construction of the new Oyo-Ogbomoso road, in order to ensure more lives are not cut short as a result of the state of the expressway.