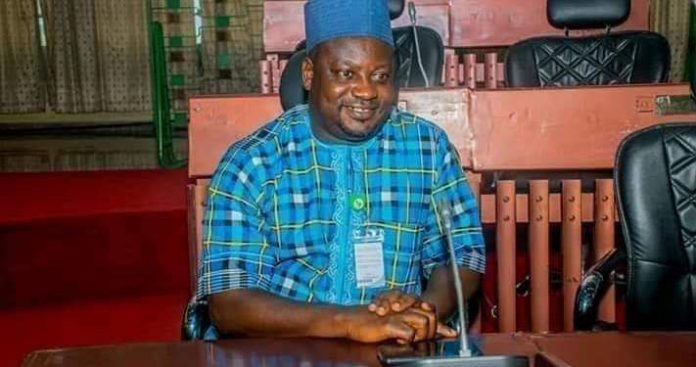 The Majority leader of the Oyo State House of Assembly, Hon Sanjo Adedoyin, his wife and some of his supporters were on Tuesday attacked by some angry members of the constituency.

The attack took place during the Ogbomoso South local government meeting of the People’s Democratic Party.

But the lawmaker said the attack was the handiwork of some perceived political enemies, calling on his supporters not to retaliate but allow peace to reign.

Sources said the meeting which holds fortnightly, held at Methodist Primary School, Arowomole, Ogbomoso turned riotous when the lawmaker tried to make his way into the venue of the meeting.

According to a source who is a member of the party, Adedoyin had attracted the wrath and anger of the youths in the constituency as a result of his neglect of the party members at the local government since his emergence as a lawmaker and majority leader of the house.

Adedoyin popularly called Sanjay was also accused of locking down the party LG Secretariat owing to the perceive feud between Governor Seyi Makinde and former Majority leader of the House of Representatives, Mulikat Akande-Adeola.

He was said to have been playing loyalty card to the Ex-House leader, but which Akande-Adeola had dissociated herself from.

Trouble started when the party leaders at the local government level had to look for another space to be used as Secretariat.

Sources explained that Adedoyin antics had been deceptive as he had not staged or done any empowerment project since he assumed office as a lawmaker.

Additionally, the source said the constituents, especially youths are angry with the lawmaker because he did not appoint any aide from the people nor has anyone else on his payroll which would have served as a means of empowerment to the constituents.

“During our party local government which usually hold once in every two weeks at Methodist primary school Arowomole, Ogbomoso.

“Hon. Sanjo Adedoyin who was accompanied with his wife and his followers were not only denied entrance to the venue of the meeting but also beaten alongside his wife to stupor.

“It takes a great effort of the party leaders to whisk him away from the scene.

“Some of the issues he has is that, he abandoned the party since after emergence and only returned when he thinks he need the party again for his re-election.

“He was also accused of closing down the party secretariat for almost two years which prompted the new leadership of the local government to rent another apartment which is now been used as party secretariat at local chapter.

“People also accused him of greediness as he is the only honorable without aides nor having anyone on his payroll, up till now there is no singular empowerment done by this so called honorable”, a source said.

According to another source, the attack on the lawmaker is a signal to other elected officials that their return will not be on automatic ticket but they would need to convince the constituents again through party primary should they want to seek re-election.

When contacted, Adedoyin said his wife was not attacked but was at the scene of the incident. He confirmed he was injured after he was stoned at a very close range.

When asked on the allegations, the Majority leader said the leadership issue that rocked the recent party primary necessitated the decision to close up the initial Secretariat but it was collectively agreed on securing another office.

He said “What transpired was that I went to the party meeting yesterday, I didn’t know that some people have planted some others at the entrance of the place and they started stoning people, so, we had to leave in order not to let it degenerate into crisis.

“If you go to my office at the House of Assembly complex, you will meet two or three of my aides who are from my constituency. You can ask from the authorities of the House, I have more than enough aides.

“What transpired was that there was faction during the party primary on the choice of leadership at the local government, but after the intervention of the governor and some leaders, we choose to close a group for the other.

“And I said the one that is the parallel, we will close it down, but we held series of stakeholders meetings before then. Infact, I attended the LG Excos meeting yesterday where I explained to them my plans for empowerment.

“What they are accusing me of not doing as empowerment, all we the lawmakers are just planning for the second one, no one has done more than one. It was just yesterday I told them what I planned to give them in the party as empowerment, we just fixed next week Wednesday for it.

“On the allegations that I sealed party Secretariat, the chairman knows what transpired about it, and I used him as witness yesterday. Some of us are the ones responsible for the payment of the rent before having party Chairman, and it was the party Chairman that went to meet the Council chairman that other council should be the one to finance the party Secretariat as they have the men’s to make that happen.

“We met the Council Chairman on several occasions and he was refusing and it was in that account that they sealed up the Secretariat, so how can someone say I locked up party Secretariat. At the end of the day, I still went ahead to pay the rent up till this year. I have been the one paying the money.

On his next line of action, the lawmaker said “I have been a party man for a very long time and I have gone pass the stage where I will say I want to arrest my party members.

“We already know those who sponsored and instigated it and we have reported at the right quarters and they are taking action on it, even at the state level.”

On his alleged plans to seek a reelection, he said “Is it a sin to recontest? Is it not constitutionally permitted? Yes, I want to recontest. It is those instigating the crisis that we should ask what sin it is to recontest. And they are even the ones spreading the rumor because I haven’t officially announced to anyone that I will recontest. I guess they were surprised at the crowd they saw with me at the meeting yesterday.

“I can only appeal to the people to remain calm as everything will be sorted out soon.”