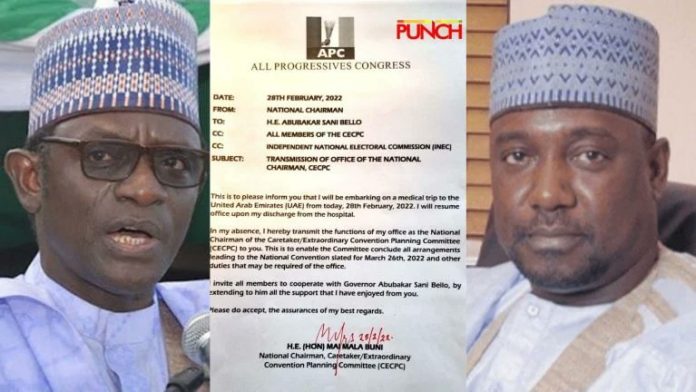 Governor Mai Mala Buni of Yobe State intends to return as the Chairman of the Caretaker Committee of the All Progressives Congress once he returns from his medical leave, his leaked letter to the APC has revealed.

The letter dated February 28, 2022, which was obtained by The PUNCH, was sent to Governor Sani Bello of Niger State and other members of the caretaker committee before his departure.

In the letter, Buni willingly transmitted power to Bello.

The letter read in part, “This is to inform you that I will be embarking on a medical trip to the United Arab Emirates from today, February 28, 2022. I will resume office upon my discharge from the hospital.

“In my absence, I hereby transmit the functions of my office as the National Chairman of the Caretaker/Extraordinary Convention Planning Committee to you. This is to enable the committee to conclude all arrangements leading to the national convention slated for March 26, 2022, and other duties that may be required of the office.

“I invite all members to cooperate with Governor Abubakar Sani Bello by extending to him all the support that I have enjoyed from you.”

Governor Nasir El-Rufai of Kaduna State had on Wednesday stated that although Buni willingly transmitted power to Bello, they soon discovered that Buni’s committee had no plan of conducting the March 26 convention but was making secret moves to postpone it on the strength of a court injunction.

El-Rufai said the President, Major General Muhammadu Buhari (retd.), was informed of this and he swiftly ordered that Bello takes over the affairs of the party permanently.

The governor said Buni would not return as chairman of the caretaker committee, adding that at least 19 governors are in support of Bello.