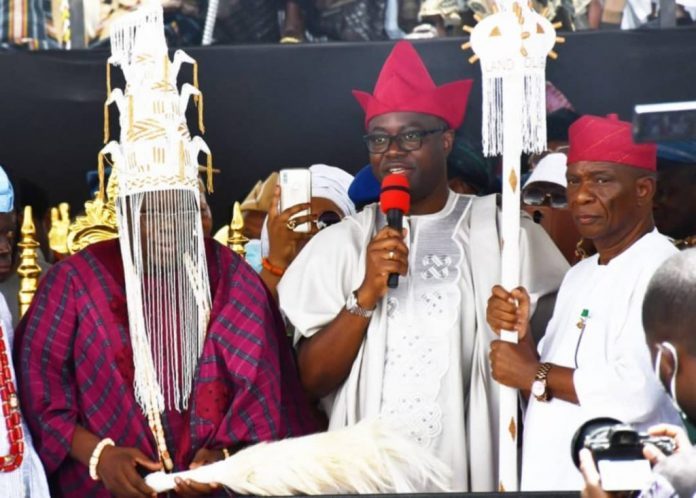 The newly installed 42nd Olubadan of Ibadanland, Oba (Dr) Olalekan Balogun, has assured the people of Ibadanland and Nigeria in general that he would not let them down.

Balogun made the pledge in his first public speech shortly after Gov. Seyi Makinde of Oyo State presented the Staff of Office and Instrument of Office to him as the 42nd Olubadan of Ibadanland.

Gov. Seyi Makinde of Oyo State presented the Staff of Office and Instrument of Office to Oba (Dr) Olalekan Balogun as the 42nd Olubadan of Ibadanland at exactly 12.30 p.m.

The News Agency of Nigeria (NAN) reports that the programme was officially declared opened at exactly 11.14 a.m with the recitation of National Anthem, Oyo State Anthem as well as Ibadan Anthem.

The opening prayers were said by Christians, Muslims and the traditional prayer by the Araba Awo of Ibadanland.

However, the 42nd Olubadan of Ibadanland was ushered into the venue at exactly 11.50 a.m, after which all the traditional chiefs, Mogajis, religious leaders, leaders of various associations in Ibadanland paid homage to Oba Balogun.