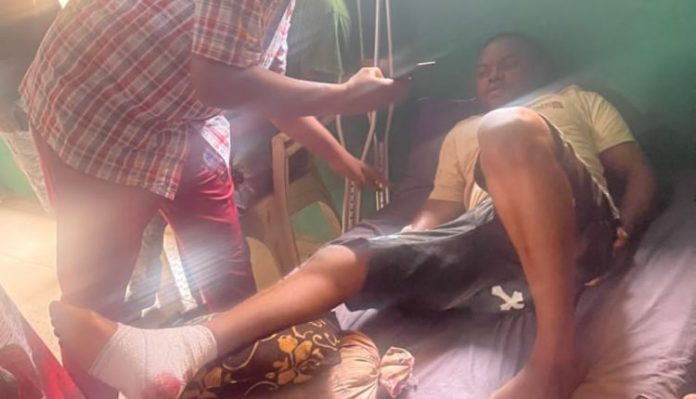 A policeman has reportedly shot and injured a student of the Adeseun Ogundoyin Polytechnic in Eruwa, Oyo State.

The student, Samuel Akinsuyi, was said to be going from Eruwa to Ibadan, on Friday, when the policeman stopped him during a stop and search operation and assaulted him thoroughly before shooting him in the leg.

It was not clear what the policeman accused Akinsuyi, a student of Business Administration Department, of, but the trigger happy cop was said to have fled the scene immediately after shooting the student.

The South-West coordinator of the National Association of Nigerian Students, Olatunji Adegboye, in a statement on Monday said the injured student was now battling with paralysis as a result of the shooting.

He also accused the police of cover up, while lamenting what he described as incessant police brutality, especially against students along Ibadan-Eruwa road.

Adegboye said, “On a daily basis, harmless and helpless Nigerian citizens continue to fall victim to bloodthirsty police officers who mete out on Nigerians various inhuman treatments ranging from verbal assault, outright assault, unlawful arrest, unjust detention and more often than not, being shot at.

“Those saddled with the responsibility of safeguarding us from danger have turned themselves to the actual danger.

“On Friday, March 11, 2022, the Nigerian students yet again suffered a great injustice from the hands of a reckless policeman.

“Akinsuyi Samuel, a Business Administration student at the Adeseun Ogundoyin Polytechnic in Eruwa, was beaten and then shot on the leg by a yet-to-be-identified stop and search police officer, on his way from Eruwa to Ibadan, on Friday.

“This demonic action has thrown Mr. Samuel Akinsuyi into a titanic battle against paralysis.

“It is rather unfortunate that several days after the criminal incident, the Nigeria Police Force, Oyo State Command, and the Police Service Commission have failed to make convincing action statement over this persistent cankerworm.

“As the custom is, most times when an officer of the law infringes on the fundamental human rights of the citizens, the police force and the service commission usually perfect a cover up and make sure that justice is circumvented.

“Up till now, the assailant remains unidentified. This is a clear sign of the regular conspiracy practices of the police force.

“As we continue to piece the puzzle together, we demand a thorough and exhaustive investigation to identify the culprit and that the law be allowed to take its full course through the arrest, dismissal and prosecution of the offender as well as other disciplinary actions from the force itself and the police commission.”

Meanwhile, the Special Assistant to Governor Seyi Makinde on Students Affairs, Hon Victor Olojede has assured the Samuel and his parents that justice would be served. Olojede stated this on Saturday when he visited the victim at his family residence. He called for calm saying that Governor Seyi Makinde remains committed to the welfare and safety of students within and outside Oyo state. His words:

“On Saturday, I visited Akinsuyi Samuel, a final year student of Public Administration of Adeseun Ogundoyin Polytechnic, Eruwa who was on his way to ibadan when he met this unfortunate scenario of being a victim of the unprofessional and uncivilized act of the men of Nigeria Police Force.

“I assured Samuel and his family that we make sure that justice is served and also that His Excellency, Engr. Oluseyi Makinde , the Executive Governor of Oyo State is committed to welfare and safety of Oyo state Students.

“I want to plead with the Oyo state Students especially Students of The Adeseun Ogundoyin Polytechnic,Eruwa to remain Calm as justice will be served.”