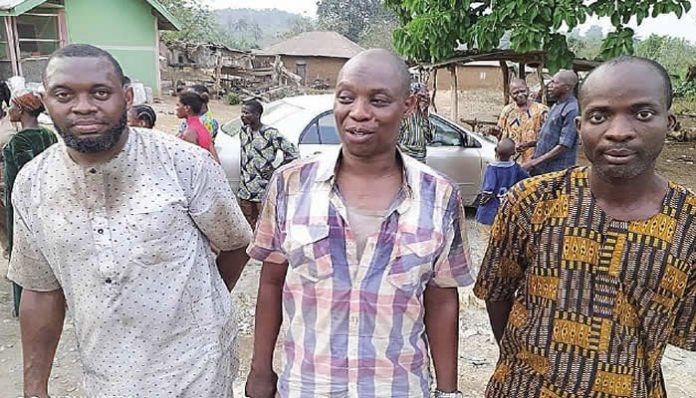 Where were you abducted?

On the fateful Monday when the incident happened, I was with my uncle, Abiola Adeyemo, who is a partner in our project – we are into cashew plantation and lately we delved into palm kernel crushing to produce palm kernel oil to supply refineries which convert same to vegetable oil. Our factory is at Ogunmakin off Idi Ayunre in the Oluyole Local Government Area of Oyo State. The company is close to Kopek and we have been there since 2020 and we have about 30 people working for us.

That afternoon, my uncle and I, with one of our factory men, Ademola Onanuga, were together. We were on our way from the factory, just like a minute drive away from the factory gate when a gang of seven armed men suddenly jumped out of the bush and waylaid us.

They were Fulani men. The seven of them were Fulani but one of them spoke smattering Yoruba. He was the one who interpreted to us.

What time of the day did the incident happen?

That was about 3.50pm. They just came out of the bush and forced us out of the vehicle and took our phones and deactivated them. One of them emerged in our front and by the time we looked back, we saw six others, armed, so, we did not struggle with them. They put all our phones in a bag and marched us into the bush. We trekked for about six or seven hours but my geographical instinct was telling me that we were just going round in circles.

At a point I became thirsty because I was fasting that Monday and I saw a stream of water where some cattle were drinking from. I had to scoop some of the water with my hand and gulped it just to stay alive.

We continued until they stopped at around 12 midnight and we settled down. Less than five minutes after we stopped there, some creatures like gorillas or big monkeys just emerged from nowhere and scared us. The kidnappers brought out their guns and when those animals saw that they ran back into the bush. We crossed to the other side of the road, where we eventually settled. From there, we could see the Lagos-Ibadan Expressway some metres away. We saw vehicles passing on the expressway clearly. We saw vehicles that broke down and these guys (our abductors) were alert because they were not sure if those vehicles actually belong to security agents probably trailing them. But immediately those vehicles were fixed and driven off, the kidnappers relaxed again.

When it was about the dawn of the second day, they relocated us from where we slept to another place. We heard voices of farmers around the place but they could not see us. They would take us to the former place at night and during the day they would take us to a new location with shed. That was how they moved us for the four days we spent in their captivity.

Did they give you food?

I requested for food but we were not given any food for those four days. I asked that they should even give us bread but they asked if we saw them eating too. On the third day they went to a nearby farm and uprooted cassava and ate it raw. They offered us the raw cassava but we rejected it. On the day they released us, they offered us cassava again but we said no. It was better to remain hungry than to eat raw cassava.

Didn’t they call your people for ransom?

They did and they started with a ransom of N25m but we eventually settled for N15m. They said they would take N15m because despite beating us, we did not struggle with them. We said it would be stupid of us to struggle with armed men.

How many of you were abducted?

Three of us – my uncle, our factory man and myself. But we were unable to raise the N15m. They eventually got N10.7m but before they took that they beat us to stupor. I spent two days in hospital upon our release because the beating was just too much.

But before that, when they were sure that ransom was coming, they gave us all manner of conditions and demands. They said after collecting the ransom they would count it to ensure it was complete. They said if the money was not complete, they would be tough on us. They said whoever was bringing the ransom should come along with bread and soft drinks. They said they wanted Coke and Fanta, specifically. They also demanded Rothmans cigarettes.

When the ransom was brought, some of them went to collect it at their chosen location while some stayed behind with you. After collecting the ransom, those that went phoned those with us to bring us over to where they were. We trekked for about 15 minutes to get there. They opened the bag and gave us from the bread and the drinks that our person brought before they released us. They also requested MTN cards and they were given N2,000 worth of MTN recharge cards.

When they said we could go, my uncle asked them, “Should we run or walk?” They said we were free to walk away. They directed us to a particular bush path, saying it would lead us to the main road. Then they went back into the bush.

We saw the person that brought the ransom and we went straight to the DPO, Idi Ayunre Police Station to report that we had been released. They said they had been looking for us and I said if they had searched properly, they would have found us because we were just within 30 minutes walking distance from there.

We left there and stayed two nights at the hospital and after we left the hospital, we went to the Department of State Services where we also told them we had been released. They asked us questions and we answered. We also went to the police anti-kidnapping unit to inform them.

From the picture you painted, it means security agents had not completely cleared kidnappers from the bush along the Lagos-Ibadan Expressway.

Kidnapping is still happening there. We could see vehicles on the Lagos-Ibadan Expressway at close range from where we were hidden. Those guys (kidnappers) could have swooped on the occupants of the vehicles that broke down but they did not do that because they had bigger targets already and they could not leave us to hunt for other victims. So, kidnapping issue has not stopped there. These people know the bush, especially in Oluyole Local Government Area, very well. Men of Operation Burst used to come to the area where our factory is and that used to give us a kind of confidence but the day we were kidnapped, it happened in the afternoon. I don’t agree that kidnapping has stopped in the area.

You still have your business there. What do you think should be done to stop the hoodlums operating in the area?

Members of my family told me clearly that we have to shut down the business and we have started that process now. It’s a pity that 30 persons will be thrown into the already saturated labour market but I can’t help it. There is no way I will go back to that business. I won’t disobey them because they have said I should not call them if I fall into the hands of kidnappers again. So many people were contacted before that ransom was raised. People contributed as low as N20,000 and I won’t wait for this to happen to me again. Whatever we are able to raise from the factory we will accept it.

The kidnappers told us that their gang does not strike twice but they didn’t know of other gangs. They assured us that they would not kidnap us again but other gangs can strike.