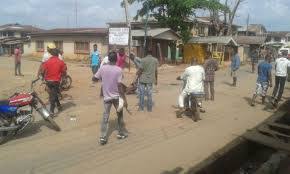 An Officer of Operation Burst and a villager of Iluju in Orire local government area of Oyo state have been reportedly dead.

The two people died as a result of an unrest, which occured during an organized football match in the village.

According to an eye witness, it was leant that, someone left a motorcycle on the field where a group of people had scheduled to play football.

The source said the development led to a level of misunderstanding compelling one of the factions to invite men of Operation Burst.

It was gathered that, the arrival of
Operation Burst was unable to restored peace at the scene while on the course of intervention, Officers of operation burst allegedly shot a villager, a development which prompted the villagers to go on reprisal attack which resulted in to the death of an officer and the destruction of Operation burst van

As at writing this report, westerndailynews.com gathered that, all roads leading in and out of the village had allegedly been blocked.