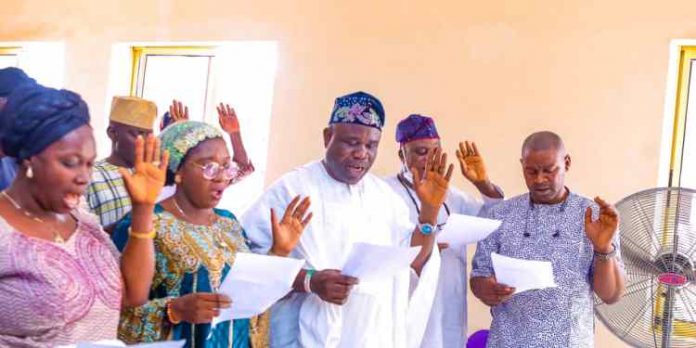 We Are Harmonising Excos In 5 LGAs – Omodewu

Ahead of the March 26 convention of the All Progressives Congress, Oyo State Chapter of the party has inaugurated 35 state Excos members and 32 Local Government chairmen with the exception of Egbeda LGA.

The inauguration was done Tuesday morning at the Oke Ado State secretariat of the party.

The State Chairman of the party, Hon. Isaac Omodewu while speaking after the inauguration stated that the new local and ward executives were products of the ongoing harmonisation and reconciliation process within the party.

While noting that all tendencies within Oyo State APC have stakes in the party structure from ward to state level, Hon. Omodewu clarified that the inauguration of party chairman of Egbeda LGA was stepped down, owing to pending issues.

He also promised to unite every members of the party and lead APC to victories in 2023 general elections.

According to him, “Fellow members of our great party, the congresses have come and gone; there is no victor, no vanquished. It’s time to get united and mobilised for the 2023 general elections”.

“My main tasks are to unite all tendencies within the party and to lead APC to victories in 2023 general elections.”

“To be in charge of a very sophisticated political party like APC is a heavy responsibility; I assure our teeming members, it is a responsibility we will not take very lightly. I pledge to do my utmost, God being on my side, to justify the faith and the confidence all APC members have imposed on me and other executives at all levels.”

“To whom much is given, much is expected. Therefore, I pledge to run an open and transparent administration where all party members will be carried along. Also, our administration will instill discipline, respect for rule of law and constituted authorities within and outside the party.

“Apart from genuine reconciliation and harmonisation, our administration has also embarked on aggressive membership drive. Let me reiterate that APC is a party built on the principles of democracy and human development; the party provides equal opportunity for every party member and any Nigerian that is willing to join the party.”

“To the state and local party executives being inaugurated today, I charge you to work in line with the party’s constitution and also ensure you carry all party members along without discrimination or nepotism. You are also expected to work hard to settle all disputes and differences in the party living no aggrieved party member behind.”

“I am assuring our party leaders, aspirants and their supporters that era of impunity and imposition of candidates is over. Our administration shall create a level-playing field for members jostling for one position or the other in 2023 elections. We’re returning the party to the members; they will determine the faiths of all aspirants. No leader or group will be allowed to impose candidates on the party.”

According to him, harmonisation and reconciliation process is in progress in the aforementioned council areas.