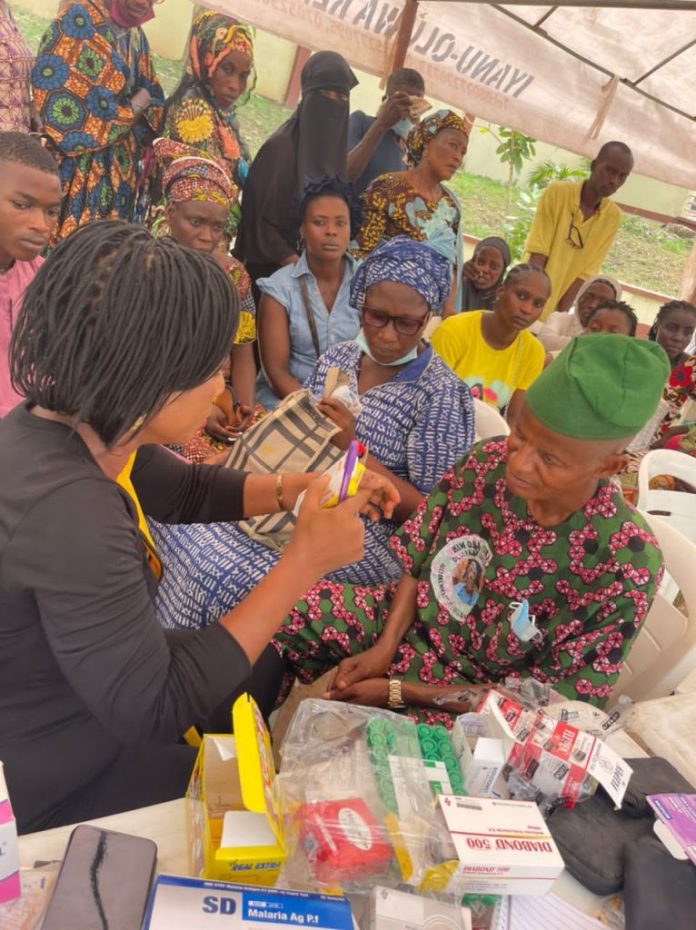 Speaking with journalists at the one-day event, Oloye Akika said this is part of the programmes lined up by OMI TUNTUN BENEDICT FORUM to compliment the health policies of Governor Seyi Makinde’s cardinal point agenda as contained in his Road Map to Accelerated Development 2019-2023.

He said the turnout had made it clear that more Oyo Residents were in need of quality health care services in the state especially at the grassroots. He called on political office holders to support Governor Seyi Makinde who is doing everything possible to make quality health care available for residents. His words:

“The economic situation of the country has made it hard for people to access quality health care, but in our own little way, we have been able to bring free health service to the people.

“We have done this free medical outreach in some local government areas in Ibadanland, we are not relenting we are committed to providing free health care to the people at no cost. Governor Seyi Makinde’s administration has embarked on the renovation and reconstruction of 351 wards across the state. He has upgraded and equipped major hospitals in all zones of the state. We must support him with whatever resources at our disposal. Oloye Akika concluded.

In the last one year, Oloye Benedict Akika has conducted free medical outreach in Akinyele and Lagelu local government councils, he has conducted mega empowerment programmes in Akinyele, Lagelu and Ibadan Northeast local governments. He reconstructed Idi Ape central mosque at Olorunda, he has drilled over 4 boreholes in different council areas, he is currently constructing a police station in Olorunda Aaba. He has been paying WAEC, NECO and JAMB fees for students. He was conferred with Agbaakin chieftaincy title of Olorunda Aaba in November, 2021.

Some of the beneficiaries of the free medical outreach expressed their happiness and appreciations to Oloye Benedict Akika describing as a worthy loyalist of Governor Seyi Makinde.

Yunisa Ajani from Ijokodo “Having been praying since for the organisers for the free treatment, because if is kind of program continues it will reduce death rate in our society. Am happy for the free glasses and treatment“

According to Mrs Joseph Nkechi ”I was just passing through the venue when someone told me free medical outreach is going on here, when I get here my eyes was tested with eyes glasses which is good . I appreciate the organisers for making me ”

Mrs Joseph Nkechi said ”I appreciate the governor for this initiative because it has been long that witness something like this. God will bless his family and for other things Makinde has been doing for past years. Am grateful because where I wanted to treat my eyes I was charge huge amount of money. But when I got here it totally free.”