Home NEWS I Was Shot At Twice At A Social Gathering, Don’t Want To...
Facebook
Twitter
WhatsApp
Telegram 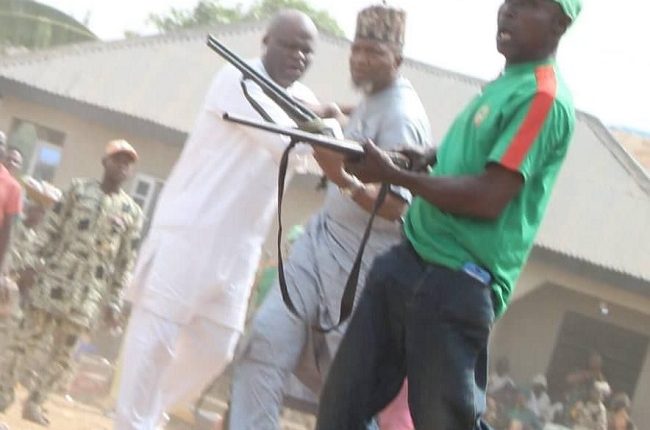 The Executive Chairman of Lagelu Local Government, Hon Kazeem Adeyemi Gbadamosi has disclosed why he collected a gun from a local security personnel at a social function on Friday. He said he was shot at twice by some guys and he had to seize a gun from one of the local security operative as self-defense.

He noted that his action prevented him from being assassinated like two federal lawmakers who were killed in similar fashion in the past.

Narrating the scenario to Tribune Online on Sunday, on behalf of others, a resident, Mr Segun Durojaiye, informed that the incident occurred during the burial ceremony of the late father of the Peoples Democratic Party (PDP) chairman in Lagelu Local Government, Chief Femi Falowo.

Durojaiye, who was at the ceremony told Tribune Online: “It was a usual social gathering, but for the fact that it was the burial ceremony of a politician’s father, the event attracted politicians from across nooks and crannies of Oyo State. Security personnel, both local and government were on the ground.

“Trouble started when an aspirant of the House of Representatives seat for Lagelu/Akinyele federal constituency, Adetokunbo Abideen Adeaga, arrived at the venue alongside his supporters and local hunters who were present welcomed him with gunshots, it was at this point that the security personnel recruited by the Local Government authority started shooting, a development which prompted guests at the party to run for safety.

“As this was ongoing, Gbadamosi, probably frightened by the presence of Adeaga, snatched a gun from one of the local government security personnel and attempted to shoot. It took the intervention of Adeaga and some other people to prevent him from shooting.

“I want to on behalf of other residents call on the Governor of Oyo State, Mr Seyi Makinde to please call Gbadamosi to order in order to avert future occurrence, not to put residents under unnecessary tension and also not to tarnish the image of the government of Oyo State.”

While reacting, Gbadamosi in a telephone conversation with Tribune Online said: “I see what happened last Friday as an attempt to assassinate me. I was shot at twice, I can recognise the guy who shot at me, he was putting on a different dress. Adeaga came into the venue of the party with some guys in complete black attire.

“Initially, I did not want to talk on this matter because it all happened in the presence of men of the Directorate of State Security (DSS) and the Nigerian Police. What came to my mind when the shooting was ongoing was that it was a deliberate attempt to kill me just like they killed two lawmakers from our constituency, late Honourable Segun Oladimeji a.k.a Segelu and Olatoye a.k.a Sugar. I collected a gun from the security personnel to defend myself. If I did not do that at that point in time, I would have been a dead man by now.”