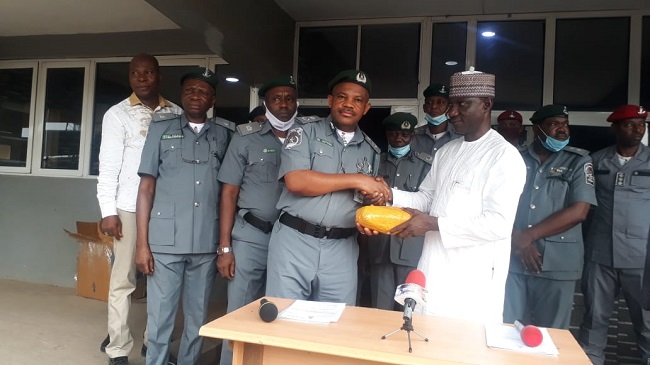 The Oyo/Osun Area Command of the Nigeria Customs Service on Thursday handed over 32 wraps of compressed Cannabis Sativa and a suspect, Ramoni Dauda, to the National Drug Law Enforcement Agency (NDLEA) in Oyo command.

The suspect and the drug exhibits were intercepted at Ikire axis on Ibadan/Ife expressway.

At the handing over which took place at Customs headquarters at Ikolaba area, Ibadan, the Area Controller, Babajide Jaiyeoba said that the interception, done in the course of duty by Customs operatives, was in furtherance of synergy and collaboration with the sister agency.

According to the Comptroller, “if we find something incriminating while on our statutory duties, we apprehend and hand over to the relevant agencies saddled with such responsibility.”

He added: “I want to assure all that the Oyo/Osun Area Comand of the Nigeria Customs Service under the Comptroller General, Col Hameed Alli (rtd) will continue to strive to ensure that this country is safe for all of us in line with the Customs & Excise Management Act (CEMA) Cap C45 LFN 2004.”

He sounded a note of warning to criminals to steer clear of Oyo/ Osun command as they would not find a hiding place again.

In his response, the state Commander, NDLEA, Abdullahi Saeed, who expressed appreciation to Customs for the interception and arrest, said that it showed healthy relationship and collaboration between the two security agencies.

“We are in a period when we are waging war against drugs.
It is telling Nigerians generally and criminals particularly that Customs and NDLEA are on the same page. Customs have zero tolerance for drugs the same way we do. That was why they intercepted these drugs. I believe the relationship will get stronger,” the NDLEA commander added.