Home NEWS I Lied To Police That I Killed My Husband To Make Him...
Facebook
Twitter
WhatsApp
Telegram 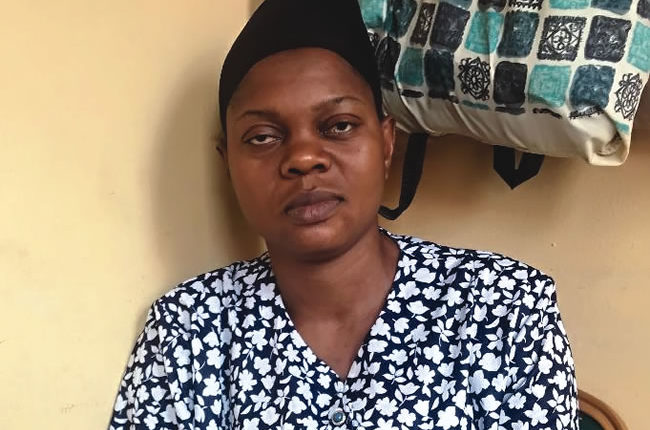 A 43-year-old woman, Ifeyinwa Veronica Nwankwo, who went to Iyaganku police station in Oyo State Police Command on Monday to report her stabbing her husband, Joseph Nwankwo, to death has been found to have given a false story, as her husband is hale and hearty.

The woman, who also gave her name as Omowumi of Yoruba tribe from Ondo State is an Igbo woman from Enugu State, but domiciled in Ibadan with her husband at Kannike Odoye area of Ibadan North Local Government area.

A national daily (not Nigerian Tribune) published the story of Ifeyinwa’s arrest after she reported herself at Iyaganku police station that she killed her husband by stabbing him because he wanted to marry someone from his village, while she, a Yoruba woman, was pregnant with their child.

This had reportedly set police officers in motion, with her being arrested, after which she was taken to Yemetu police station under which jurisdiction the incident was believed to have occurred.

But to the surprise of the law enforcement agents, she called her husband’s relation on phone, telling him that she was at the police station because she killed someone. Her husband, who was informed by the relation, came to where his wife was being held, trembling with what he thought had truly happened as he was told.

As he was approaching, Ifeyinwa pointed at him and said: “That’s my husband.”

Unbelievable as it seemed, the police asked Nwankwo whether it was true and he confirmed he was her husband. A little bit taken aback and confused by the woman’s report and what was being witnessed, the police officers took her and the husband into their residence and searched everywhere to see if they would find a dead body, but nothing of such was discovered.

The husband told the police officers that he left his wife at home for his shop on Monday morning and was there when he received a call from a relation that his wife had been arrested for killing someone.

Saturday Tribune went in search of the couple and was able to get details of what happened. The wife, Ifeyinwa, introduced herself and told the story thus: “I am Ifeyinwa Veronica Joseph Nwankwo. I’m 43 years old. It is true I went to the police to tell them I killed my husband. I gave my name to the police as Omowumi, the Yoruba translation of my Igbo name ‘Ifeyinwa’ to make the matter serious. I also told them that I’m from Ondo State but I only schooled there.

“I work with my husband In his shop where he sells patent medicine and provisions.  We live at Kannike Odoye in Ibadan and have been married for 10 years. We are looking up to God for fruit of the womb and living together in peace.”

Explaining her reason for coming up with a false story about stabbing her husbsnd to death, Ifeyinwa said: “I am at the police station because when I talked to my husband, he would not listen. He would just make me crazy. Secondly, if I wanted to conclude something with him, he would not listen to me.

“Last December, I wanted to travel to Enugu State to see my father. I wanted to be safe. He is just doing as if everything is well but it is not so. I wanted to come out of the bondage but my husband said I should not go.”

What bondage? she was asked. “I want my glory to shine because I believe I have a future. I was dying in silence,” she answered.

Continuing, she said: “One of my uncles died in 2019 but I was not at the burial. My father became sick in February this year and I was called that if he died, he would not forgive me; that I should come and see him when he is still alive. But my husband threatened me that if I go, I should not come to his house again. That made me crazy. I was thinking: am I in a cage? That was what made me  take the step.”

What step? she was asked again. She answered: “I went to Iyaganku police station to tell them that I had killed my husband because he wanted to marry another wife who is Igbo while I’m pregnant. I told them that I’m a Yoruba woman from Ondo state. I wanted them to take my matter serious because I don’t want to die.  I heard a voice in the spirit which told me to take that step. That was while I was praying on return from church on Sunday April 3. I sang and then slept. That was when the voice came.

“Whenever I wanted to discuss issues with my husband, he would dismiss me, saying that after all, I have not got any child for him. That was what made me angry.”

However, she admitted that her husband had never been unfaithful to her since they got married.

On getting to the police station, Ifeyinwa said she was not initially taken serious as the policemen she spoke to were avoiding taking up her report. “I left the men for female officers and started crying.  They asked what was wrong with me and I replied that I had killed someone in our room. Immediately, they passed the information round and quickly handcuffed me. I told them to follow me to the house.

“They took me to Yemetu police station which covers where we live.  I knew that I was supposed to go there but I didn’t want them to be shouting at me. I wanted to go to a place where the matter would be so hot.

“I don’t want to leave my husband  but just wanted to see my father to get out of poverty and want.”

On the story that had gone viral that she killed someone, the woman said: “God forbid that I should be a murderer.”

She disclosed that she was recently ill, saying that it usually occurs whenever anger overtakes her, causing her headache and sleeplessness. She also said that she was given prescription for  medications she should be using from her home state when she was coming to Ibadan after marriage. She added that she did not take the medication the day she became sleepless.

“Whenever I’m angry, I would be sleepless but once I take the medication, I would sleep and become okay. It was because I couldn’t sleep on Sunday night through Monday that I became restless. It actually started on Saturday. I did not quarrel with my husband and did not stab him.

True to her narration, Ifeyinwa had visible redness and puffiness under her eyes during the interview.

The husband, Joseph, aged 47, also corroborated his wife’s illness, saying that it must have brought the nervous breakdown.

According to him, “it’s been a while she went to church, so I didn’t know she would go this week. After we came back on Sunday, we ate. We slept and in the morning, I went to the shop. At 12:12pm, my brother called me and asked for my wife. I told him that I left her at home. That was when he told me that he received a call from her, telling him that she killed someone, and that she was in a police station writing a statement.

“I locked up the shop and went home, only to see policemen and women around. My heart skipped. I asked a policeman what had happened and he asked who I was. I replied that I am the husband of the woman they brought. They asked again whether she had another husband and I told them I’m the only one. That was when they told me that she said she killed her husband. I said that was me with them, while we didn’t know if she actually killed someone else.  They opened our room and searched everywhere but couldn’t find any dead person inside. That was when they  asked about her health and I told them she sometimes came up with such nervous  breakdown.”

He said she was not like that when they were about to marry but started having the problem suspected to have manifested when she had typhoid, stating further that she had had the breakdown many times.

Joseph made it known that she had been taking the medication prescribed for her in Enugu but not often. He said his wife did not commit any crime, adding that her false claim was prompted by her illness.

When contacted, the Police Public Relations Officer in the state, SP Adewale Osifeso, while speaking on the case said that the Commissioner of Police, Ngozi Onadeko, appealed to all and sundry against spreading fake and unverified news items capable of truncating the relative tranquility enjoyed in the state.

“The Oyo State Police Command remains unwavering in the provision of comprehensive and robust security  coverage for the citizenry. Updates would be provided accordingly,” he added.