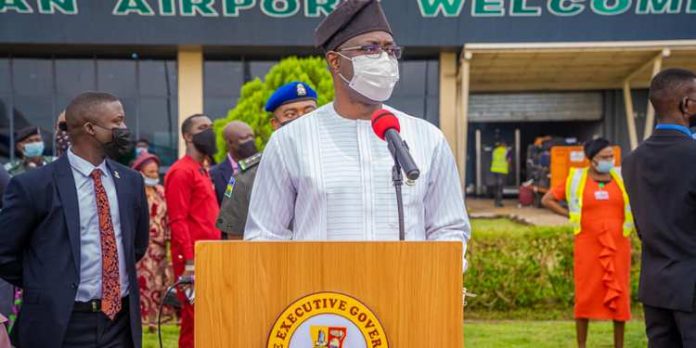 Oyo State Governor, ‘Seyi Makinde, has declared that the efforts of his administration to upgrade the Ibadan Airport to international standard have remained on course.

He added that his government considers the airport as key and central to its vision to expand the state’s economy, stating that the government would continue to partner with critical individuals to bring about the success of the venture.

A statement by the Chief Press Secretary to the governor, Mr. Taiwo Adisa, indicated that the governor, who was represented by his Chief of Staff, Hon. Segun Ogunwuyi, stated these at the weekend, during the retirement ceremony held in honour of Mrs. Ogenetega Aiyenuro, the outgoing Airport Manager.

Ogunwuyi, who on behalf of the governor, described Mrs. Aiyenuro as a friend of Oyo State, lauded her for everything she has done for the facility and the state.

He assured the gathering that the state would continue to partner with the retiring director.

He said: “God has given her the grace and she has also used ‘omoluabi’ to engage and become part of us in Ibadan.

“We still want you to work for us all because you still have a very long way to go. So, I want to say we will continue to partner with you even going forward. You are a friend of the state, our sister and a mother. By the grace of God, I believe we will still do better things together even after you have left service.”

The governor presented the retiring Airport Manager with a Toyota Hilux.

Speaking earlier, a Director with the Federal Airport Authority of Nigeria (FAAN), Mr. Sunday Ayodele, commended Mrs. Aiyenuro for keying into the vision of Governor Makinde’s administration to expand the economy of the state.

The director said: “Mrs. Aiyenuoro has collaborated with the Oyo State Government and keyed into the vision of Governor Makinde in having an expanded economy in the state. This Airport is important in expanding the state economy.

“I will say again that, despite the fact that it is a Federal agency, she has been able to collaborate with the state government to upgrade the internal and external parts of the airport. The internal works include the lounge, dualisation of the road coming into the Airport as well as the Ajia-Amuloko spur up to the airport.

“There are a lot of other things that we have been able to do, including the 500,000 litres capacity aviation fuel terminals that we are bringing in. So, she has shown us that whether you are a state official or Federal Government worker, a lot can be achieved.

“So, we wish her well even in her journey going forward.”

The former Airport Manager, Aiyenuro, in her speech, appreciated Governor Makinde for being instrumental to the success of the Ibadan Airport under her watch.

She added that the transformation at the Airport was due to the grace of God and the efforts of the governor, saying: “I want to thank Governor Seyi Makinde. In fact, he is the governor of the world as far as we are concerned here. He has been very instrumental to the success of Ibadan Airport.

“All you see today is by the special grace of God and the cooperation of His Excellency. Through him, we have been able to transform this Airport.”