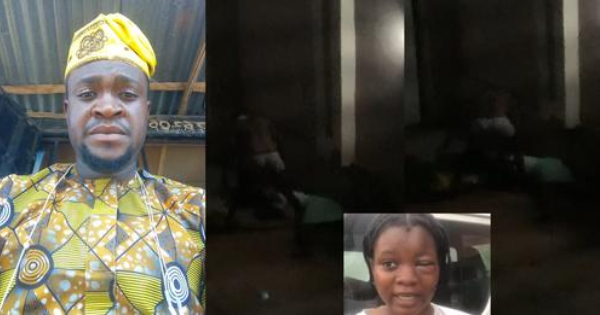 In Ibadan, a man identified as Taofeek Gbolagade has been called out for assaulting his pregnant wife earlier today, over Sahur (pre-dawn meal) .

In a viral video being circulated online, the man is seen punching the pregnant woman who continued to cry out in pains.

It was gathered that the distasteful incident happened around 4am on Tuesday, April 12, 2022 at their residence in Ogbere Housing Estate, Ibadan, Oyo state.

A neighbour who recorded the incidence from a close distance while speaking with newsmen said, “This man always beats his wife over any little misunderstanding they have.

“I was able to record today’s event. He’s a Muslim so I think they had an argument over Sahur.

“This man didn’t mind that she is pregnant with his second child and started pouncing on her”, he added.

In the video, the victim whose left eye had been seriously battered said they had argued a bit the night before, over what he would eat to break his fast but the latter kept insulting her whenever she responded, until they all went to sleep.

She noted that she was not feeling too well due to stomach upset when she woke up but still managed to put food on fire for him before she attended to her child who had defecated.

Unknowingly to the husband that, the wife had gone to fetch a bowl of water to clean the child, he held the child to himself.

She narrated that she immediately told him to put the child down for cleaning, before he started throwing punches at her and even hit her in the eye almost blinding her.

Despite trying to defend herself and running to other flats for help, Taofeek kept following her in his shorts, treating her body to blows and kicks.

She noted that nobody came out to rescue her despite her outcries because they were used to her being beaten by her husband.

Meanwhile, reports have it that Taofeek has fled his house after being declared wanted by the police.