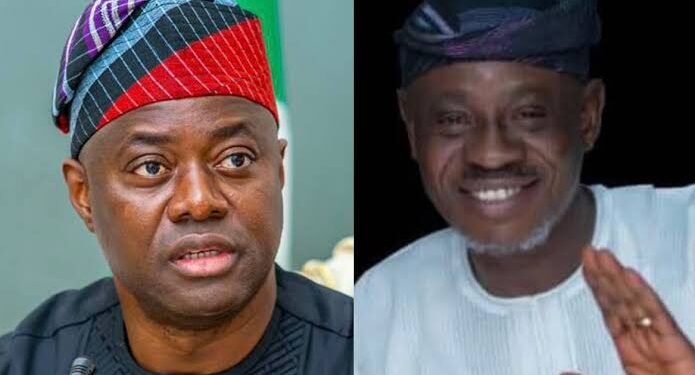 The former Deputy Governor of Oyo State and leader of People’s Democratic Party (PDP) in the state, Barr. Hazeem Gbolarumi has vowed to usurp Governor Seyi Makinde to become the next governor.

In a video presently trending online by Yoruba Tooto TV, the legal practitioner and political son of late Strongman of Ibadan politics, Alhaji Ariyibi Adedibu revealed how the incumbent governor betrayed PDP party leaders and a reason he will be denied opportunity to get ticket to contest for second term under the political party.

In the video excerpts, Gbolarumi said: “I was founding member of PDP with Alh. Ariyibi Adedibu. In 2019, I withdrew for Makinde to become Oyo State Governor because I thought he was young and he would perform better. But when he got to power, he did contrarily.

“Before we endorsed him, we discussed with him the importance of security to societal development but he reneged. The position of the power has intoxicated him. But now, we are ready to unseat him because he met us in this political party and we will not leave this party for him. He left the party in 2015 after we denied him ticket and he went to court. He contested in SDP but didn’t win and he returned back to PDP but out of our magnanimity, we accepted him, but he turned out to be an ingrate.

“Since his reign in Oyo State, the level of insecurity has increased. His highest education is first degree and among his members of his cabinet, there is no PDP member. He imported them from Lagos, abroad and other political parties.

“PDP in all parts of Oyo State have endorsed me as their preferred governorship candidate. And once I get the ticket, all aggrieved members will return to PDP.

“What will happen to Makinde in Oyo State PDP has happened to Ambode in Lagos APC. The only candidate to win presidency for Nigeria is, Waziri Atiku because he has invested, tested and trusted. By God’s willing, if I become governor of Oyo State, there will be positive changes in Oyo State governance. There won’t be wayward youths causing mayhems and all and sundry will benefit from my government. And by God’s grace, Makinde will be usurped for me to become the next governor in Oyo State”, Gbolarumi revealed.