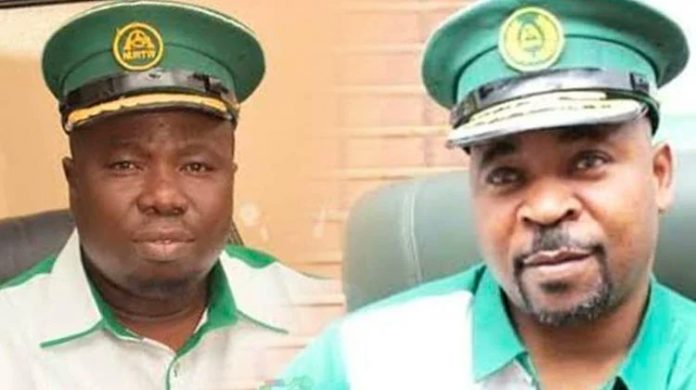 Scores of policemen and soldiers stormed the Ijaiye Bus Stop in the Agbado area of the Alimosho Local Government Area of Lagos State on Monday to forestall a clash between road transport unionists loyal to two factional leaders in the state: Musiliu Akinsanya popularly called MC Oluomo; and Azeez Abiola, aka Istijabah.

Our correspondent, who was at the bus stop, spotted about five patrol vans of security personnel who were on a joint mission in the area on Monday.

The fully armed policemen came in four patrol vans, while fierce-looking, gun-wielding soldiers stormed the bus stop in a van and remained there from morning till about 4pm when they left.

Our correspondent also observed as over 100 area boys and foot soldiers of both MC Oluomo and Istijabah seethed with rage as they stood just opposite the security agents.

A tricycle operator, who simply identified himself as David, told The PUNCH that the security agents got intelligence that MC Oluomo boys planned to violently take over the park controlled by Istijabah and his lieutenants.

“About 40 policemen and 12 soldiers came very this morning to prevent a clash between Istijabah and MC Oluomo boys.

“There would have been a violent clash if not for the presence of the security personnel who came in five vehicles,” he said.

The situation caused panic as traders shut their stalls over the fear of a possible clash between the two factions.

“We were terrified since morning and had to shut our shops and go back home. We just open now after the area boys and the soldiers left,” a Garri seller told our correspondent.

Efforts to reach MC Oluomo and Istijabah proved abortive as of press time.

When contacted, the spokesman for the Lagos State Police Command, Benjamin Hundeyin, promised to revert but he was yet to do so as of press time.

The PUNCH had earlier reported that MC Oluomo and Istijabah boys clashed last week in the Fagba, Ogba and Agege areas of Lagos over the control of parks and ticket sales.

MC Oluomo had rejected Istijabah as TOOAN chairman in the state and the national body of NURTW in Abuja had suspended him (MC Oluomo) which led to his withdrawal from the union and the suspension of NURTW by the Governor Babajide Sanwo-Olu government.

The governor subsequently appointed MC Oluomo as the parks management committee chairman despite public outrage and warnings of fresh violence.

According to a 2021 report by the International Centre for Investigative Report, the Lagos chapter of NURTW generates about N123.08bn annually, which could service the annual budget of Nasarawa, Niger, and Yobe states put together.