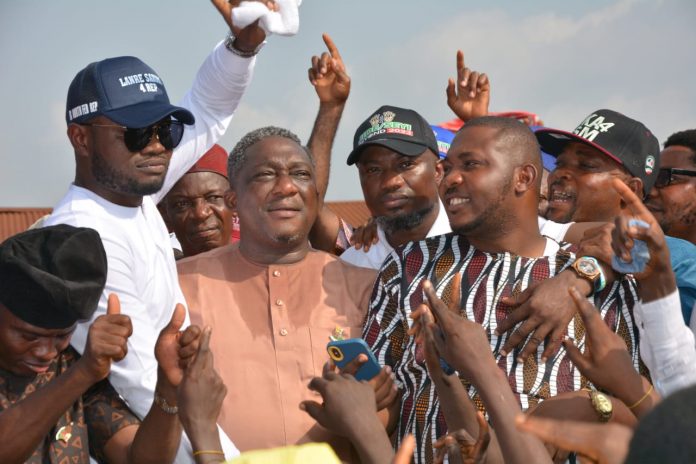 One of the Peoples Democratic Party (PDP) leading aspirants jostling for the ticket to represent the good people of Ibadan North Federal Constituency at green Chambers Hon. Lanre Sarumi declared his ambition to the joy of thousands of his supporters at the Salvation Army Primary School yemetu.

The young Sarumi left no stone unturned with his mesmerizing charisma, he said ” The long awaited day has come, that I Olanrewaju Sarumi Submit myself to our mothers who through whom I came to this world, Youths’ who I’ve come to represent as their own face, and the men as a voice to speak on their behalf” It’s no gain saying that I’ve made consultations and and I can boldly say, that Ibadan North federal Constituency has been shortchange when it comes to representation at the green chambers.

I want you all to send me there with your votes, I’m invigorated and ready to work for the good of our constituency, I promise to bring meaningful representation to your door steps, While taking a swipe at the incumbent rep from the opposition camp, the Young and Energetic Sarumi said “when you hear jah, don’t wait for the ban, run!! they’ve been tested but failed us, Hon. Lanre Sarumi assured the good people of Ibadan North federal Constituency of representation of human face, having a holistic understanding of what the people of Ibadan North federal Constituency want, ” I will center my programs on people centric just like our leader His Excellency Engr Seyi Makinde has done.”

“I assure you that the same vein at which you’re enjoying the good works of Governor Seyi Makinde at the State, such goodies will i also bring from the national assembly, he concluded to the delight of his thousands supporters. he equally call on party faithfuls to send the opposition party packing, by ensuring that they vote for The People’s Democratic Party (PDP) for all position, if all position from State Assembly, Governor, Reps, Senators and President it will be a victory for all.

Speaking At the event the PDP local government Party Chairman Prince Seun Adelore commend the efforts, energy and resources put together by Team Lanre Sarumi Supporters, he charge them to imbibe the spirit of educating the general public on voters card registration as this will give them edge if Fortunes smile on them and they won at the primaries.

Meanwhile the Ibadan North local government chairman Hon. Yusuff Sahib Oladayo, Charges electorates within the party not to divide, he said ” I want everyone here present today to understand that our goal is to win every elective position right from the State honorable, Governorship, Federal House of representatives, Senate and the president of the federal republic of Nigeria” He enlightened the crowd on the beauty of having many elective positions in the party, Saying the collective responsibilities of all of them including we at the grassroots will deliver immesurable dividence of democracy to everyone.

Also Speaking at the event was the young and Energetic Oyo State PDP Youth Leader Hon. Michael Ogunsina, He call on the youths to support a youth representation that will inturn be beneficial to them, “We we’re told the Youths are the leaders of tomorrow, Now is the tomorrow”, he said “you ask for a youth representation that will represent your interest you’ve gotten as many as possible, it’s time we show our strength as youths that we really mean business, the reality is right here with us, While also urging them to go out about the whole process without playing bitter intra party politics. Hon Michael Ogunsina concluded by saying with the synergy he has seen within the youths in the State, there’s no doubt that the State political climate will wear a new look with the emergence of vibrants Youths at both the State house of Assembly and federal representative seats.