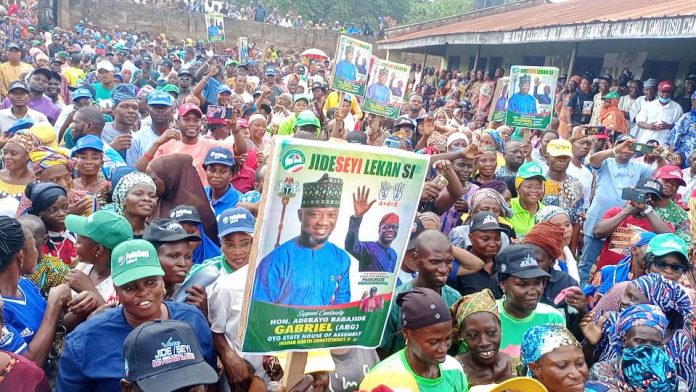 Ibadan North Constituency II was thrown into a beehive of activities on Wednesday as a Member of Oyo State House of Assembly, Honourable Adebayo Babajide Gabriel, who is adjudged as the best performing PDP lawmaker in the 9th Assembly officially declared his second term ambition.

While addressing party leaders, stakeholders and thousands of his supporters at Salvation Army Primary School, Yemetu, Ibadan, the front line aspirant thanked his constituents for the mandate given to him to serve them in the 9th Oyo Assembly, adding that he has been able to fulfil all his campaign promises with the bills he sponsored, motions moved, his numerous mega empowerment programmes, cash support for medium and small scale traders, inauguration of twelve (12) motorized boreholes, provision of direct employment opportunities for the youths, skills acquisition programmes among were the few he could recollect from his track records.

The astute business tycoon, technopreneur turned politician disclosed that his agenda is all-encompassing, youths and women centered and therefore sought the support of party leaders, members and the entire residents of Ibadan constituency 2 for another four-year mandate.

He assured residents that he would continue to champion the course of the people with proper legislation that will bring more development to the constituency if he elected for another term.

In his remarks, Ibadan North PDP Party Chairman, Prince Seun Adelore appreciated the mammoth crowd who attended the declaration rally for their loyalty and support, he enjoined them to get their voter’s cards, adding that supporting any candidate or aspirant without a voter’s cards will amount to efforts in futility.

Aslo speaking, The Executive Chairman of Ibadan North local government Hon. Yusuff Sahib Oladayo (Agba-Egbe) admonished the supporters, to vote capable and credible candidates into elective position. He added that Hon. Adebayo Babajide Gabriel has performed beyond expectations, no doubt there might be some quarters he’s not been able to touch, reasons he is seeking a second term to continue the good works he started, Agba-Egbe equally solicit the support of the crowd to vote for Governor Seyi Makinde 2nd term bid, adding that one good term deserves another, “Remember the more the merrier, vote for all our candidates, when we have power at the center, it can only accelerate dividence of democracy, which i believe is the gain we want as individuals and as a party.