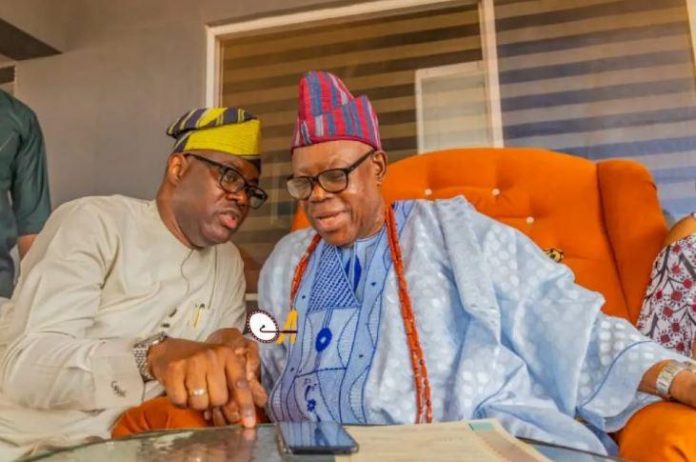 Pensioners under the aegis of Oyo State 2002 Pensioners have appealed to the state governor, ‘Seyi Makinde, to look into the plights of about 2000 workers retrenched by the late former governor, Alhaji Lam Adesina, who have not been paid pension for over 13 years, saying that they are dying of hunger on a daily basis.

They made this appeal in Ibadan on Wednesday, during their Save our Soul visit to the Olubadan of Ibadanland, Oba Lekan Balogun, Alli Okunmade II.

Led by the Chairman and Secretary of the group, Alhaji Mustapha Bamgbade and Comrade Olu Afolabi respectively, the group lamented that more than half of the group had died due to lack of money to take good care of their health.

Bamgbade said the group had no reason to begrudge Governor Makinde, who is doing commendably well in terms of pensioners’ welfare.

The chairman, therefore, urged the Olubadan to help prevail on Makinde who was described as ‘kind-hearted and peace-loving’ to show mercy on them.

He pleaded with the monarch to appeal to the governor to extend his virtue as a compassionate governor to them by wiping their tears through payment of the pension arrears.

While recalling the circumstances that led to their premature retirement in 2002 by the government of the late Adesina, Bamgbade explained that the late governor was misled into sacking them with a view that the exercise would save the cost of governance.

”We kept on agitating for our pension payment since 2002 and not until 2015 when our prayers were answered and since then, we have been asking for the payment of our pension dues for 13 years, 2002-2015, which had since remained unpaid,” the chairman added.

Responding, Oba Balogun, the Olubadan of Ibadanland, sympathised with them over a decade of pension arrears, while urging the governor to look at their plights and make them happy by paying the outstanding money, therefore invoking the doctrine of continuity in government.

”We cannot blame the governor for the huge debt the successive administrations have been ignoring, but the government is a continuum and this places a huge moral burden on the governor and government of the state, which the people served meritoriously to be called upon to look into it”, Oba Balogun concluded.