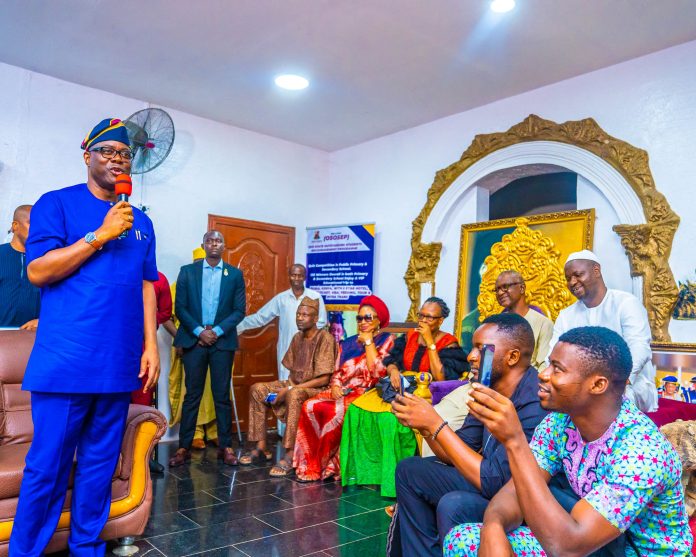 Governor Seyi Makinde of Oyo State, Sunday, replied his critics that he is not responsible for the deaths in quick succession of three foremost monarchs in the state.

He also vowed that the state will not spare anything to give the late Alaafin of Oyo, Oba Lamidi Adeyemi 111, a state befitting burial.

Makinde made the disclosure, while addressing family members of Oba Adeyemi and the Oyomesi, during his official condolence visit to the palace of the departed monarch in Oyo.

He, equally, charged the Oyomesi, who are saddled with the responsibility of choosing the next Alaafin not to allow a vacuum for too long, noting that his government would ensure that the wishes of the late Alaafin come to pass.

The governor said this was necessary so that some wishes of the late Alaafin, which he was privy to can be fulfilled.

Makinde, while reacting to social media rumor in a comical manner, said he was not the one responsible for the d3aths of foremost monarchs in the state.

Oba Adeyemi was the latest of the First Class monarchs who have joined their ancestors in the last five month in Oyo State.

However, Makinde said all monarchs who have joined their ancestors in the state were ripe in age and have made impact on the people.

He said: “No matter how old the Alaafin was, we would not have wanted him to join his ancestors. When he ascended the throne of his forefathers, I was very young. But because of the way Kabiyesi was to us, we would have loved to have him with us forever if it was possible.”

“For that, we are sad but we are also happy because Kabiyesi lived long on the throne of his forefathers”

“Secondly, since we heard about the news of his d3ath, throughout yesterday, I received calls from the Presidency and a lot of my colleagues. Sultan of Sokoto and Emir of Kano have called me personally.”

“What this means is that Kabiyesi lived a fulfilled and impactful life not only in Oyo State but throughout the federation. That is why those who are mourning with us could also feel the impact.”

“At this point that we are mourning the passage of Baba, they are also identifying with us.”

Governor Makinde declared that Alaafin’s d3ath has left a huge void that would be difficult to fill, saying: “In Oyo State, we have perhaps lost the last human encyclopedia of our traditional history, because several times when I visited him and told him the kind of problem we had, he had solution to everything.”

“So, it is a very difficult void to fill. In fact, I don’t know who else we can go and meet, who can replace Kabiyesi.”

“When I visited him in 2015 and told him about my ambition, he frankly told me it was not going to work out due to one reason or the other and, at last, I failed but I learnt certain things. Not many people will tell one the truth. Kabiyesi told me it would not work and it never worked out.”

“Having realised this, I got to understand again that in position of authority, not many people will want to tell one the truth, and that lesson came from Kabiyesi.

“For all of us in Oyo State, it is a difficult period and what we need more is prayers. All the good things Baba wished to come to pass, may God give us the wisdom to actualise them. And I want to promise everybody that, as a government, we will do everything possible to give him a befitting burial rite.”

“I want to appeal to you Oyo mesi, who are in charge of installation of monarchs. We don’t want to see any vacuum for a long time. When you are done with the rites you are supposed to perform, we are here to ensure the wishes of Baba come to pass,” the governor added.

Earlier in his address of welcome, representative of one of the ruling houses in Oyo, including Adeyemi, Ladigbolu and Agunloye, Bishop Ayo Ladigbolu, noted that the d3ath of Oba Adeyemi was not mourned but being celebrated.

Ladigbolu further said that Oba Adeyemi was a true reincarnation of Atiba who bade the world farewell in April and similarly joined his ancestors in the fourth month of the year.

While lauding Governor Makinde for his timely visitation despite his busy schedule, late Alaafin’s eldest son, Prince Babatunde Adeyemi, charged all to bequeath good legacy to the unborn generations because all humans would answer the clarion call one day.