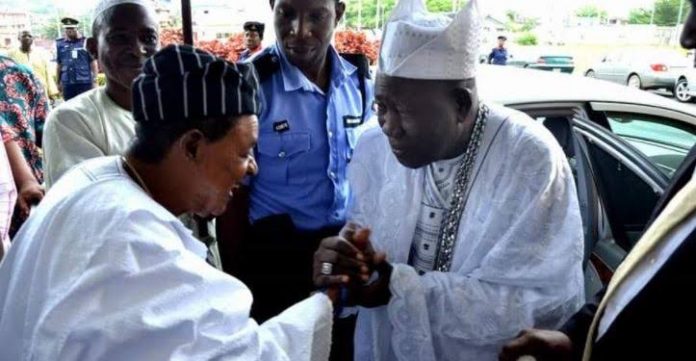 This is not the best of times for the Oyo State Government as it continues to bury some of its best human assets. The state wailed on receiving the shocking news of the death of immediate former governor Abiola Ajimobi on June 25, 2020. It was, however, not too difficult to overcome the grief shortly after by the reason of his protracted illness that ended in death.

Then, death receded for 18 months before striking again. This time, it visited the Soun of Ogbomoso, Oba Jimoh Oyewunmi (Ajagungbade2), on December 12 last year. Before the agony waned, death flew to the palace of the late Olubadan of Ibadan, Oba Saliu Adetunji (Aje Ogunguniso 1), on January 2 this year. As the state wondered about death’s unwanted visits to the aristocrats in quick succession, it feasted on another former governor, Adebayo Alao-Akala, on January 12, leaving indigenes and residents somehow distraught.

For Governor Seyi Makinde, the situation became historical and significant. The state just held the coronation of the new Olubadan of Ibadan, Oba Lekan Balogun, in March. A new Soun is yet to be coronated. While smarting from the situation, the most prominent of them, Alaafin of Oyo, Oba Lamidi Olayiwola (Adeyemi III), joined his ancestors last Friday. His passage shook the country given his rich history, glamour, elegance, prominent position in Yoruba land and his large sphere of influence.

Oba Adeyemi’s passage still left many bewildered. His appellation as ‘Iku Baba Yeye’ is fully illustrated in how the palace poet praised him as “Omo iku ti iku o gbodo pa; omo arun ti arun o gbodo se; omo ofo ti ofo o gbodo se” (meaning a death’s child who death must not kill; one who must neither be diseased nor suffer loss). Aged 83, Alaafin Adeyemi III commanded huge respect within and outside Yoruba land. He possessed panache, was charismatic and conducted himself in pure royal grandeur. A repository of history of Yoruba and Africa, Oba Adeyemi humbled many with his unparalleled narration of history spiced by his love and display of pure Yoruba culture.

Being the consenting authority to very many obas in old Oyo State and some others in Ogun State, Adeyemi recommended and secured the elevation of many baales to beaded crown-wearing obas including the Olubadan and Soun of Ogbomoso. Others include Timi of Ede, Okere of Saki, Aseyin of Iseyin, Aree of Iree, Akinrun of Ikirun, Olufi of Gbongan and Alayegun of Ode-Omu. He also enjoyed the honour of personally conducting their crowning. In reference to his efforts, Oba Adeyemi once wrote: “This unprecedented innovation of Oba Adeyemi III was in conformity with his oath of office on assuming the office of the most exalted traditional institution in Yoruba land. I have added glamour and dignity to the institution of obaship in Yoruba land, all to the glory of Almighty Allah.”

For Governor Makinde, he has not just buried his immediate two predecessors; he has buried three topmost obas within a space of two years. Politically, the governor will enjoy the opportunity to widen his popularity in Oyo in addition to his rise in Oke-Ogun and Ogbomoso where he has dazzled residents with some projects that rejuvenated their economy and met their aspirations. In spite taking over Ladoke Akintola University of Technology (LAUTECH), Ogbomoso to end funding crisis, Makinde would have had Alao-Akala to contend with in pursuing his second term ambition. He would have also had a hard time cracking Oba Adeyemi’s political dynasty.

With Ajimobi and Alao-Akala out of the scene, which has dealt a heavier blow on the opposition All Progressives Congress (APC), Makinde may have few hurdles to cross to realise his second term ambition. However, should APC leaders find a common ground, end their disarray early enough and present popular national and state assembly candidates, the governor faces a herculean task of overcoming criticism of his policy summersaults, alleged inflated contracts on major projects and shunning of political gate-keepers. Nonetheless, Makinde has been giving befitting burial to the passing leaders. He has also given a firm promise to do the same to Oba Adeyemi.

To Makinde, the demise of the foremost traditional ruler is the fall of a legend in the truest sense of the world. In a statement signed by his Chief Press Secretary, Taiwo Adisa, declared that the death of the traditional ruler is a huge loss to the state, Nigeria and the Yoruba race. He also described Adeyemi’s death as a personal loss to him. “I have been informed about the death of our father, His Imperial Majesty, Iku Baba Yeye, Oba Lamidi Olayiwola Adeyemi III. I express heartfelt condolences to the Oyo State Council of Obas and Chiefs, which Oba Adeyemi chaired for decades, the Oyomesi and the entire people of Oyo Kingdom. I equally commiserate with the Oloris, children and entire Adeyemi family on the demise of their patriarch and worthy father.

“Kabiyesi’s departure is a huge loss not only to Oyo State, to which he committed 52 years of his life as the Alaafin of Oyo Kingdom, but also to Nigeria and the entire Yoruba race. Oba Adeyemi was our last man standing in the rank of most eminent royal fathers with long years of leadership.”