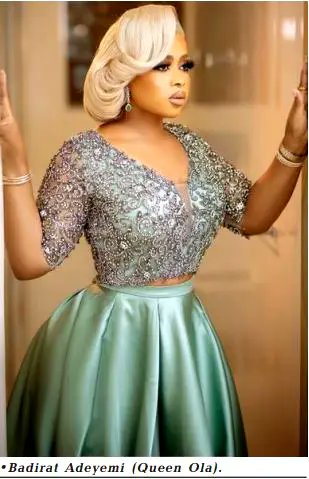 •It has started discreetly —Head of princes

BADIRAT Adeyemi, one of the estranged wives of the late Alaafin of Oyo, Oba Lamidi Adeyemi, known on social media as Queen Ola, has given insight on the love story between her and the late monarch.

The late Oba Adeyemi III died on Friday night at the Afe Babalola University Teaching Hospital, Ado-Ekiti, at the age of 83.

This came as succession battle for the stool of Alaafin of Oyo will commence, after the 8th-day fidau prayer for the late monarch, Vanguard reliably gathered, yesterday.

Oba Adeyemi and I were Siamese—Queen Ola

Queen Ola, on her Instagram page, narrated how she got into trouble in the Alaafin’s palace when the late monarch started to show other wives she was his favourite.

She said when she heard Alaafin was dead, she didn’t believe it and relived how it all began between them.

She said: “I was thinking it was all lies and that you are coming back but I’m afraid I was wrong.

“The father of my kids, whom I met at an impressionable age, left when it was least expected. Whenever I tell people that the bond we shared can be likened to that of a siamese, having been married to you at age 19, they are more than transfixed.

“We were practically best of friends but the moment they had inkling about whom your favorite was, everything flopped.”

Meanwhile, investigations revealed that the selection of the Alaafin has always been a rancour free exercise, as the stool is being rotated between the two ruling houses, in accordance with the tradition of the Oyoland.

It was further gathered that the successor of Oba Adeyemi is expected to come from Akunloye ruling house, after Alowolodu ruling house, who produced the last late Alaafin.

A palace source told our correspondent that the bonafide sons of Akunloye ruling house have started signifying interest in the exalted stool.

The source, who spoke in confidence, said: “All the interested candidates would start showing interest after the 8th-day fidau prayer, which will be performed by the Chief Imam of Oyo, Sheikh Mos’ud Ajokidero, and other notable Islamic clerics in Oyo and neighboring towns. Top government functionaries, business moguls and captains of industries are also expected during the prayer.

“After that, the kingmakers led by Basorun of Oyoland, Akinade Ayoola is expected to meet and seek the approval of the Ifa divinity on who among the Princes from the next Ruling House will succeed late Oba Adeyemi.” “It was further gathered that one of the prominent sons of the family that people have been looking up to as the next Kabiyesi died some months ago.

His death, according to our findings, has created a vacuum, as the family is now looking towards another direction that would be acceptable, not only to the deities but the entire people of the town.

The source said: “In Oyoland, we believe so much in the tradition. We are not in a haste to name a new king. Traditional protocol must be strictly adhered to. Sacrifices have to be made to appease the gods and goddesses of the land.”

Meanwhile, the Baba Iyaji of Oyo, Prince Mukaila Afonja, who is also the Head of Princes in the town, said the succession moves would have started discreetly among the interested princes.

Afonja said: “I am the head of the Omooba, Princes, and as we are talking there have been moves but nobody has submitted any application to me.

“The process is this, all the princes from the next ruling house, who are interested in becoming the Alaafin will submit their applications to me.

“After screening them, I will now invite the Oyo Mesi and for example, if the applicants remain like two or a weildy number, the Ifa Oracle will be consulted to know who among them should be chosen.”

He said wealth or status alone would not be used as criterion for chosen the next Alaafin because; there would be negative consequences if the right person was not chosen.