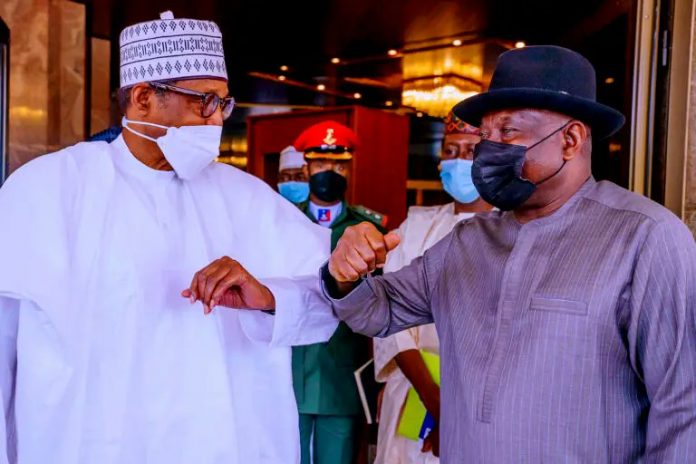 Indications emerged, last night, on how some APC top shots sold the idea of a Goodluck Jonathan candidacy to President Buhari.

Multiple sources told Vanguard that the stakeholders, including governors, had approached the former president and sold the idea of Jonathan serving one term before handing it over to his would-be Vice.

It was also reliably gathered that, as part of the deal with Jonathan, the stakeholders may have settled for a running mate from the North-East.

Multiple sources told Vanguard that both President Buhari and Jonathan have agreed on the deal.

One of the sources said: “Jonathan has agreed in a way to serve only one term but not on the platform of the PDP. I am aware of what is going on and the deal thrown at Jonathan.

“Some APC governors, also known are the ones asking Jonathan to throw his hat in the ring. From what I know and the meeting I attended, they sold the idea to Buhari. Jonathan has already met Buhari in the villa and the deal has been sealed. The game is that he will only serve one term (because he cannot do two terms having been elected for the first term earlier) and hand over to his vice, who will come from the North-East.

“They know that the former president is obedient and will do their bidding, they have seen it in the past. As you know, the North still wants to retain power and that is why they are throwing the offer at him.”

Another source told Vanguard that the presidency is not looking in the direction of Vice President Yemi Osinbajo or Asiwaju Bola Tinubu in 2023. “They do not want Tinubu or Osinbajo. In fact, what worked against Osinbajo is that they see him as an extension of Bola Tinubu, who still defers to Tinubu.”

However, the source concluded by expressing caution, saying, “things are still in a state of flux and last-minute jostling may still upturn the arrangement.”