Home NEWS How My Friends And I Killed My Woman Friend, Used Her Body...
Facebook
Twitter
WhatsApp
Telegram 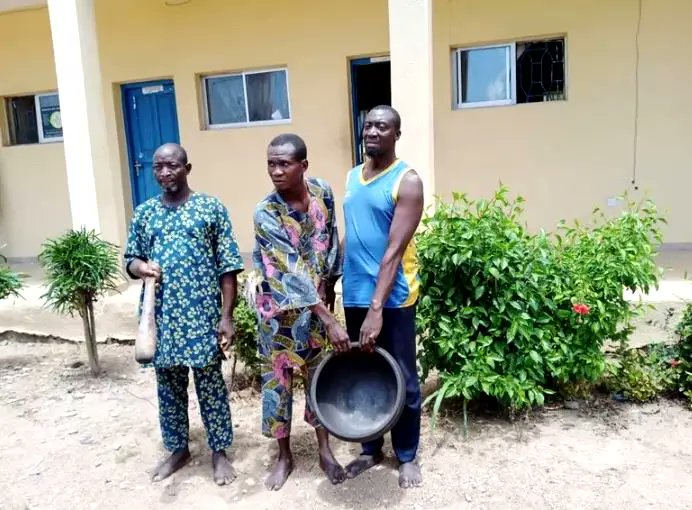 An Islamic cleric, Muideen Nafiu, 43, has disclosed that he and one of his cleric friends, Yusuf Muslim killed his woman friend and severed her body parts.

The victim, Aisat Yekeen, 53, was declared missing on March 8, 2022 only for police to discover that she had been killed, dismembered and buried by the suspect and his friends.

Narrating how she was killed, Nafiu, who has an Islamic study centre in Ileogbo, Ayedire Local Government Area of Osun state, said after he stopped dating her, his friend, Muslim, requested that he also wanted to date her.

His confession
“She was once my woman friend but we had stopped dating for a long time. One day while I was on my way home with Muslim, we saw the deceased and he told me he would like to date her too.

“So I arranged for them to meet and they met in my house. I excused them, but after about 45 minutes, I went back and met them naked. I thought she did not allow him to have sex with him, so, I held her leg but few minutes later, I discovered she was dead.

“I asked my friend why he killed her and he told me he wanted to use her hand and that we should go ahead to bury her. I quickly ran to another friend, Rabiu Fatai to inform him of what happened. He returned to the scene with me and with Muslim, they both cut the head, hand, heart and legs and buried the remains.

“Fatai took the head and heart to his place, while Muslim took the hand to his house where it was burnt and we shared the ashes. I was told by my cleric friends in the village that I would make money from ritual and stop riding motorcycle, so I took part in burning the hand.

“Meanwhile, Fatai was also burning the parts with him and I was to share from it too. But at the time I was supposed to meet him to get my share, I heard the news that Amotekun operatives were searching for me. So, I took Fatai’s motorcycle and ran away to Lalupon to avoid being arrested”, he said.

His words:
“Nafiu, my mother’s murderer was living in our community in Ileogbo, but he had always had criminal tendencies. There was a time he set a woman’s palm oil on fire and the entire building was gutted by fire. He ran away from the community and returned later.

He used to come to our house, where he would eat and even sleep at times and he had that privilege because of my younger sister’s predicament. My younger sister, who was married in Kuta was having problems in her marriage and the suspect was privy to the information.

So, he offered to help by preparing spiritual soap for both my sister and my mum. On the day my mother went missing, he called her to come and get the soap. She left home and never returned.

“After about five days of looking for her, the suspect met me and my brother on the road and sympathised with us. He even suggested that maybe my sister’s predicament led to my mother’s disappearance. But the next day, a woman in his house told us that she saw my mother entering his room but did not see her leaving. That was why we reported the matter to Amotekun operatives.

When he was apprehended, he confessed to luring her to the house, while his friend was already there. Immediately she got there, they hit her with a charm on the chest which made her lose consciousness before collecting her phone and destroying the sim card.

“He buried her in a bush not too far from his house and the way they did it showed that they might have been doing such an act before.

“My siblings and I were devastated especially, when we went to the grave to exhume her body and discovered that her body parts were severed from the rest of the body.

The most painful part of the whole scenario was that our mother was killed by someone who ate and slept in our house. My 52-year-old mother had seven of us and I am the second child.

“We want justice. People like Muideen should not be living among humans because we will all be endangered. Imagine someone who would sleep and dine with us eventually killed our mother. He should be made to face the wrath of the law.