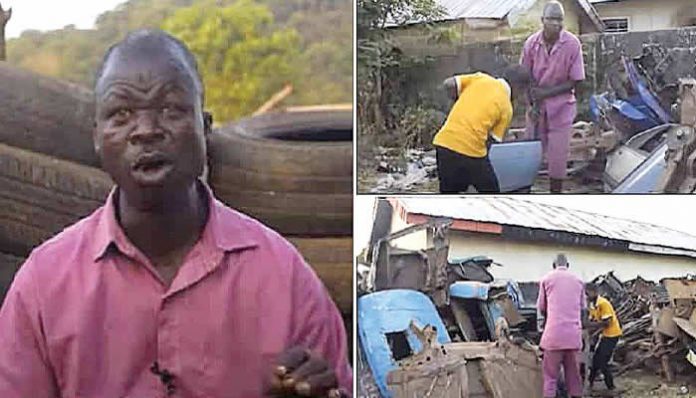 Fifty-year-old Mr Azeez Ismail, nicknamed Alfa Jakujaku, tells TEMITOPE ADETUNJI about his journey as a scraps scavenger and how he has made fortunes from the business

Tell us about yourself.

My name is Azeez Ismail popularly called Jakujaku (rubbish). I was born in Oyo State. My father’s name is Azeez; he is a well-known person in Oyo; he is wealthy. My dad has four wives with many children.

What exactly was it like growing up as a child?

What led you into scraps scavenging business?

Growing up, my parents wanted me to go to school but I decided to attend an Arabic school instead; the school is called Alawosan in Oyo. I obtained a certificate as an Arabic scholar. I am an alfa, so I can also have my own Arabic school.

I thought of what business to do apart from being an alfa. I went to the North hoping to find a good business over there; I spent two years in the North but there was nothing interesting I could do over there. I started missing home, missing my parents and I decided to pay them a visit in Oyo where I was before I left for the North.

My mum told me she had gone to different soothsayers to ask them what my future would look like. She narrated that they told her I would be travelling to different places. She however advised me not to choose a distant location to settle down for business. I started thinking again about the kind of business I could do. In the course of thinking, I met some people picking metal scraps. I was curious; so, I made enquiries from them about how they ran the business. They explained that they sold the metal scraps to some Hausa people in the neighbourhood. So I joined them.

After two weeks of starting that business, my father, as a wealthy man, frowned on my decision; he told me the job was not meant for responsible people; he added that most of the people doing the job were orphans who had no one to look after them.  He said he would give me one of his cars, so I could do whatever I wished with it. He told me in strong terms not to go into metal scraps business.

But by then I had already developed an interest in the job and I had a passion for it. So, I didn’t listen to my father. I decided to go to Iseyin and I started my metal scraps business little by little. Everybody started calling me Alfa Jakujaku because I picked metal scraps; they saw it as a dirty job.

How did you feel when people started calling you Alfa Jakujaku?

In all sincerity, I don’t feel good whenever they call me by that name, I feel irritated most times.

Did you think that the metal scrap business was in line with what the soothsayer told your mum?

My parents were one of the reasons I ventured into the business. They wanted me to have a formal education, since they already had an idea of what my future held; I had to stay in a place not too far from Oyo. I started making money at a point, which made me stick to the job.

Have you had any unpleasant experience in this business?

Yes, I’ve been through a lot; people tagged me a madman, thief and kidnapper because of the way I look, with my sack always hung around my neck. I was beaten several times.

I used to drive a small truck but it was seized by people who thought I was a thief. In addition, so many women turned me down.

What are some of the biggest things you have acquired or achieved with the proceeds of the business?

I married my wives and had my children through this business and they are doing well. I built houses for my wives apart from my personal houses; I have cars.

How many wives and children do you have?

I have nine wives and 35 children.

Would you mind if any of your children says they want to do this same business?

My children already love the job; the grown-ups among them are already selling metal scraps. If any of my children refuses to do this job, definitely he or she doesn’t have an idea of the kind of money I am making from the business.

What else would you have done if you didn’t venture into this metal scrap business?

I would have been an Arabic scholar which is the first training I got.