HomeNEWSAlaafin’s Death: Why His Burial Rites Was More Traditional Than Religious ―...
NEWS

Alaafin’s Death: Why His Burial Rites Was More Traditional Than Religious ― Gani Adams 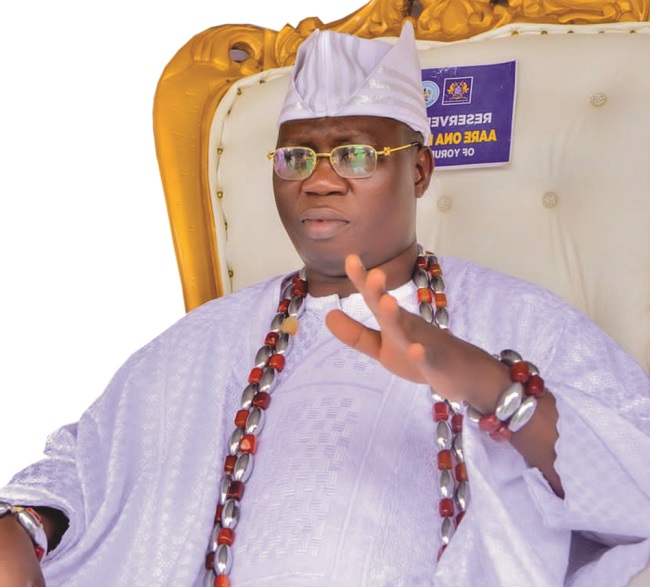 It happened that the Oyo State had not recovered from the death of one of the prominent monarchs, the Soun of Ogbomoso, Oba Oyewumi Ajagungbade when another shocking news surfaced that the Olubadan of Ibadanland, Oba Saliu Akanmu Adetunji (Aje Ogunguniso I) had also joined his ancestors in the early hour of Sunday, January 2nd, 2022. This happened within the span of 23 days after Soun’s death.

Shockingly, the people of Oyo State woke up to yet another sad, shocking and demoralized story about the death of Alaafin Oyo, His Imperial Majesty, Oba Lamidi Olayiwola Adeyemi (the III) which occurred in the late hour of Friday, 22nd April, 2022. Late Alaafin reportedly died at the Afe Babalola University Teaching Hospital, (ABUAD), Ado-Ekiti. at the age of 83.

The death of Oba Adeyemi brought to five the deaths of prominent traditional rulers in Oyo State within five months. Others apart from the top three mentioned above were the Asigangan of Igangan in Ibarapa zone and Onikoyi of Ikoyi Ile from Surulere local government area of the State. Sequel to the death of these highly revered traditional rulers, tongues have begun to wag from some quarters insinuating that Oyo State had recorded too many deaths within five months and that such deaths had evil connotations. It would also be recalled that Oyo State equally lost two of its former Governors – Governor Abiola Ajimobi who died on 25th June, 2020 and Otunba Christopher Adebayo Alao Akala whose death occurred on 12th January, 2022. Death is a mystery that no one can fathom when it will come. The time of the departed monarchs and others had come and they had gone to join their creator.

Late Alaafin the third from the Alowolodu Ruling House was the second longest-reigning monarch in the history of the Oyo kingdom after Alaafin Ikori who ruled between 1400 to 1457. Oba Adeyemi reigned from 19 November 1970 to 22nd April, 2022 before he succumbed to the cold hands of death.

Looking at the life and times of this great king, Oba Adeyemi, the late Alaafin of the Oyo empire was an absolute king. He was selected to fill the stool of Alaafin that had been vacant since 1968 because of some intrigues and issues surrounding who should mount the throne that had been vacant for more than two years then.

Since his ascension to the exalted throne in 1970, his word had become law. He was not just a traditional ruler but an embodiment of Yoruba culture. He was a king that was widely respected, his views carried enormous weight and in politics, he was always consulted by the political class from left and right. Until his death whenever Alaafin sneezes the Agodi government house catches cold, one may ask past governors in Oyo State.

In terms of the intellectual prowess of Oba Adeyemi, it will take Oyo town a real good time of searching before they can get a match of the departed monarch.

He was divinely gifted with wisdom and always a delight to journalists as he would always welcome you with historical facts and figures about Nigeria – the North, South, East or West.

He was a bridge builder between the old and young folks. He would always speak truth to power no matter whose ox is gored.

Since Saturday 23rd, 2022 when the news of his death was made public, citizens, residents and of course eminent personalities within and outside the country have been thronging the palace in Oyo to pay condolences, shower posthumous encomiums on the late monarch attesting to his generosity, kind-heartedness and a life well-lived.

Among those that had visited the palace or sent condolence message was President Muhammadu Buhari who stressed that the 52-year reign of the late monarch was remarkable in many ways, covering major historic transitions in the country, and witnessing transformations in his domain.

According to the President, “most significant was the emphasis he placed on human development, encouraging learning as a culture and formal education as a necessity, while also promoting values of peace and stability.

I cannot but note his numerous participation in national meetings and conferences to shape the future of the country, and the living words of wisdom he shared at every opportunity on unity and people-focused governance.

I extend my condolences to the Oyo State Traditional Council, Oba Lamidi’s family, friends, and associates, including in sports where he left another footprint.

I pray that the Almighty God will receive his soul, and comfort the family he left behind.”

Meanwhile, following the controversy that trailed the burial rites performed by both Islamic clerics and traditional worshippers for the late Alaafin of Oyo, Oba Lamidi Adeyemi,the Aare Ona Kakanfo of Yorubaland, Iba Gani Adams has warned not to attach religious meaning to it saying his burial was more traditional than religious.

Gani Adams stated this to dispel the rumours making rhe rounds in the media that the late Alaafin was buried according to the muslim rites,

Iba Gani Adams who was installed by the late Alaafin as the 15th Aare Ona Kakanfo of Yorubaland, disclosed that prior to the announcement of Alaafin’s death on Saturday 23rd April, 2022, the Isoro and the Oyomesi had earlier observed the core traditional rites which he said, went through the night and ended till 11am on Saturday before Basorun and the families of the Alaafin notified the Oyo State Governor, Engr Seyi Makinde who later announced officially.

He made this known in a statement issued by his Special Assistant on Media, Kehinde Aderemi and made available to Rulers’ World, hinted that the transition and burial rites of the foremost Yoruba monarch was purely traditional and not religious.

While warning those attaching religious meaning to the burial of the Alaafin of Oyo to desist from spreading lies, Gani Adams insisted that the Oyo Messi and the Isoro had done the normal traditional rites, before the formal announcement, adding that the final process of the rites would be done tonight.

“As the Aare Ona kakanfo of Yoruba land, I think it is part of my duty and responsibility to set the record straight, especially, on pertinent issues that had to do with the burial of the late Alaafin of Oyo, Oba Lamidi Adeyemi”,

“The late Alaafin’s respect for all the religions, either Muslim or Christian or even the traditionalist should not be misconstrued for anything.

“The Oyo Muslims community led by the Chief Imam of Oyo, Sheilk Masud Adabayo Ajokideru did the prayer on the remains for seven minutes to pay their last respects for the late monarch before handing over the remains to the Isoro for further observation of the final traditional rites that will lead to the final burial at Ibara tonight (Saturday 23rd).That was the truth and nothing but the truth”.

“Alaafin is not an ordinary king and the Oyo Messi, the Isoro and the Sango devotees cannot but complete the final traditional rites”.

“So the impression in the public domain that Kabiesi, the late Alaafin of Oyo,Oba Lamidi Adeyemi was buried according to Muslims rites was untrue and it was at variance with the core tradition of the ancient town of Oyo and Yoruba traditional institution in general”

In history,the burial of foremost Yoruba monarch like the Alaafin.

must not be done in the open and those that should know knew quite well that the Isoro and the Oyo Messi must observe all the rites and necessary rituals before the burial.” The statement concluded.

As a human being, one cannot say Oba Adeyemi was one hundred percent perfect as he had his flaws and shortcomings, but one thing is that in the years to come he would be remembered for his great knowledge of history, influence and promotion of Yoruba culture.

Starvation Looms As Baking Industry Moves To Shut Down Over High...