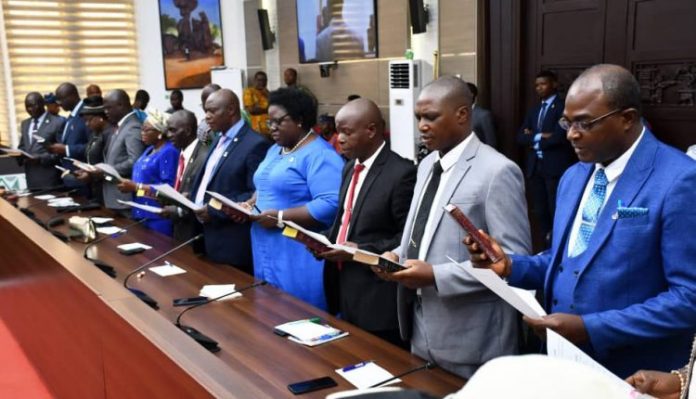 Oyo state Governor, Seyi Makinde, on Thirsday, pledged to continually maintain a system of orderliness and growth in the state public service by placing a premium on education, hard work and merit for public and civil servants in the state.

The Governor, who stated this during the swearing-in ceremony for newly promoted Permanent Secretaries, Inspector General of education, Tutor General and Surveyor-General, explained that the era of promotion based on political consideration was gone in the state public service.

Governor Makinde equally noted that the process for the promotion exercise was conducted by an independent body following standard rigours and procedures so as to instil a culture of merit-based reward system in the service.

While charging the newly promoted civil and public servants who have reached the peak of their careers to embrace their new position with trust and discharge their duties diligently without fear of favour, the Governor also promised the commitment of his administration to ensuring a constant flow of money in the state economy through regular payment of salaries and other emoluments.

He said: “We are here this afternoon to celebrate some of our own persons within the workforce of Oyo State. So, on behalf of all of us, I want to say congratulations to the newly-minted permanent Secretaries, Inspector-generals and tutor-generals of education as well as the Surveyor-General of the state.

“One of the things our administration has been working to establish in the civil service is an order that ensures that people have a clear path to growth based on dedication and hardwork. We want people to be able to choose to work in the Civil service and be assured that they can put in their best and get rewarded for it.

“We did that because we felt when people are rewarded based on their hardwork, others coming behind will know that you only get rewarded when you work very hard.”

Earlier in her remarks, the Head of Service, Alhaja Amidat Agboola disclosed that about 648 officers shortlisted for the promotion, only 28 eventually got promoted after a rigorous process to ensure merit with additional 2 officers earlier promoted in April 2021.

Who Is The Next King, If Olubadan Passes On?