HomeNEWSI Was Attacked By Hoodlums Over 3SC Draw, They Thought I Sold...
NEWS

I Was Attacked By Hoodlums Over 3SC Draw, They Thought I Sold The Game, Accuse Me Of Making Them Lose N5m In An Online Betting—Gbenga Adewusi 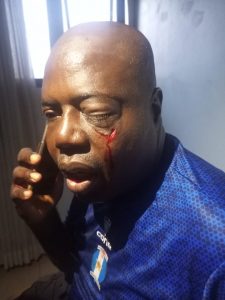 The Oyo State Sports Council Chairman, Gbenga Adewusi, has been attacked by suspected hoodlums after a match between Shooting Stars Sports Club (3SC) and MFM Football Club at the Lekan Salami Stadium, Ibadan, Oyo State, ended in a stalemate.

The 3SC are 10th on the Nigerian Professional Football League table, while MFM are 20th on the log.

The game came to an end after the visiting MFM team equalised in the 92nd minute of the game after 3SC had earlier taken the lead in 42 minutes.

Adewusi told PUNCH Metro that he was attacked because fans of the Ibadan club thought that he sold the game.

He stated that despite not being the coach of the club, the fans wanted him to make 3SC win by all means.

He said some of the hoodlums accused him of making them lose N5m in an online betting.

Adewusi said, “I was at the stadium for the game between 3SC and MFM, which ended in a 1-1 draw. Some fans of the 3SC club attacked me over that match.

“Their accusation was that I was the one who sold that match to MFM, who are 20th on the table and they said that I made them lose over N5m in the game that they played on an online gambling app.

Our correspondent saw a picture of Adewusi with blood on his face after the attack at the stadium as he was rushed to a hospital.

The Oyo State Commissioner for Information, Wasiu Olatunbosun, confirmed the incident, which he described as unfortunate.

He noted that the police were already handling the matter.

Olatunbosun said, “I am aware of what happened to Honourable Asewusi and it is a sad development. What I know is that the law will take its course and justice will be served. The police are already investigating this matter and I tell you, there will be justice.”

He said, “The case is under investigation and you will be updated.”

There have been several attacks on people in the professional football league this season.

On May 2, there was a fight between Kwara United and Rivers United fans on the pitch after the game ended.

None of the culprits were arrested or brought to book by law enforcement agents.