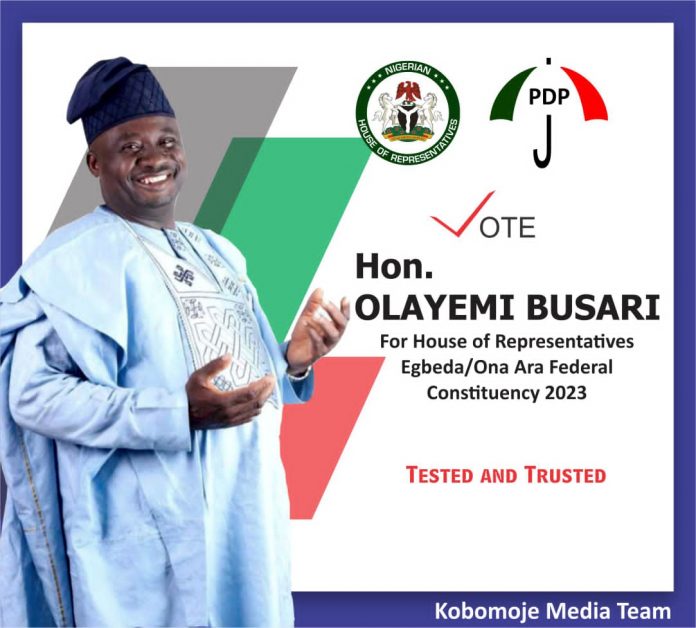 Hon. Busari Olayemi has shown his appreciation to PDP stalwarts and other concerned stakeholders following his emergence as PDP candidate for Egbeda/OnaAra Federal Constituency, Oyo State.

Olayemi’s gratitude over victory of emergence was contained in a release he personally signed and made available to pressmen.

He appreciated those leaders whose names are ranged from Oloye Jumoke Akinjide, Elder Wole Oyelese, other party’s leaders, party’s chairmen, councillors, members, students and good people of Egbeda/OnaAra Federal Constituency among others.

According to him, “It is with great joy that I give utmost thanks to Almighty God for His infinite mercies and Grace that I have steadily enjoyed since my advent into the game of politics till date , may I avail this period to also thank His Excellency, Governor Oluseyi Makinde certainly, the BEST Governor in the history of Oyo state, the architect of modern pacesetter state and “Mr Transformer”, who continues to dazzle the good inhabitants with socio economic and infrastructural developments of every sector relentlessly since he mounted the saddle of administration in Oyo state.

“Our collective prayers is may it please Almighty Allah to grant him success of the first tenure and graciously grant him overwhelming VICTORY for second term in office as evidently seen from people’s love for continuity in office beyond 2023 .

“Let me in furtherance thank respected leaders of the party in Oyo state , but particularly in our federal Constituency of Egbeda and Ona Ara Local Government areas , my thanks in the same vein goes to the Executive Chairman of Egbeda LG, Hon Sikiru sanda , who incidentally is the ALGON Chairman of Oyo state, also Hon Shaba, the executive Chairman of Ona Ara Local Government area , I also thank greatly the Head of administration in our LCDAs , all Honourable Councilors and other appointees across the two Local government areas .

“May I specifically thank all executives of our darling party, PDP who have continued to work assiduously for the strengthening of our party and more significantly, all teaming party members (PDP) Power to the people).

” lastly, but not the least, may I thank all statutory and ad hoc Delegates of our party, who have found me worthy of the party’s ticket, demonstrated unalloyed support, love & preference and eventually voted for me en masse today to emerge the party’s flag bearer for the Egbeda/OnaAra Seat at the lower chamber of the National Assembly come year 2023, which by God’s Grace , our party will win massively , and also other elective positions at the general elections scheduled .

“I believe, you all are aware of the fact that I am not a green horn in the task of representation, which I have been privileged to be tested right from when I was elected and re-elected Councilor of ward 04 in Egbeda LG and after wards my years of impactful representation at the Oyo state House of Assembly, the same grace I had to represent the federal constituency of Egbeda and Ona Ara between 2011 and 2015, and Glory be to Almighty God that assisted me, with the support of my numerous loyalists and good people of our constituency, delivered commendably as being attested from far and near”, Olayemi ended.