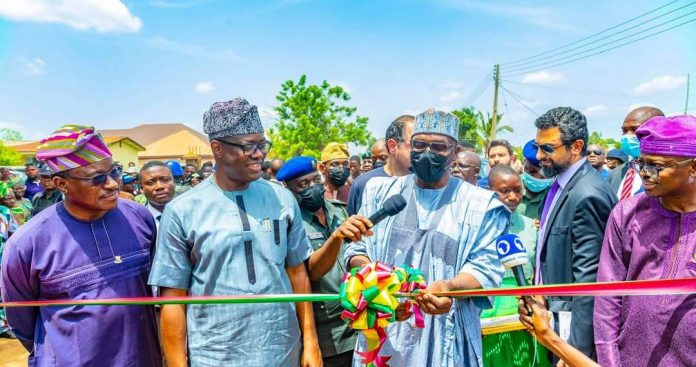 Democracy means opportunity/equality/freedom. Freedom to innovate… choose… demand the best. Also, it means the right to choose people in government, organise a process that will add value to the lives of the people.

This writer will say that to a large extent, Governor Abiodun Oluwaseyi Makinde, Executive Governor of Oyo State, has made an impact and has delivered the dividends of democracy to the nooks and crannies of Oyo State in the last three years.

To some people, he may not have moved as fast as they  expected, but definitely, the Omoluabi governor is making great efforts to develop Oyo State and is right on track. Democracy is work in progress in the Pacesetter State. There is no country or society that has finished the democratic process, not even the United States of America.

There is no doubt that we still have shortcomings in our democratic process but we will gradually overcome them as the years go by. It is on this premise that I commend the ongoing infrastructure revolution in the state and the efforts put in place to secure lives and properties by the Peoples Democratic Party (PDP) administration in Oyo State.

As a government that is determined to make a difference in the governance of the state and fulfil its divine mandate to the people of the state, it made a bold step by embarking on the construction of 550 kilometres of roads, thereby laying proper foundation for the modernisation of Oyo State in terms of roads connectivity to enhance movement of goods and services.

The following road projects are being attended to with prompt attention: Oyo – Iseyin Road – 34.85km, Gedu – Oroki – Sabo – Asipa Road, 5.25km The Road link two (2) Council Areas in Oyo connecting Oyo – Iseyin and Ogbomoso – Iseyin Roads. To attest to the fact that Omoluabis always deliver, in less than three years, Governor Makinde has delivered the 65-kilometre Moniya – Iseyin road, the 9.7km Saki township road, the three-kilometre Stadium – LAUTECH – 2nd Gate (Under G) road and has embarked on rehabilitations of major and minor roads within Ibadan metropolis and in other towns of the state.

The administration has stemmed rural-urban migration by ensuring good road network and interconnectivity outside of the Ibadan zone. This is highly commendable, because once there are good roads, developments follows.

There is no doubt that the Oyo State government has done a lot in Oke-Ogun, Oyo and Ibadan axis of the state. Plans are at an advanced stage to expand the road network linking Oke-Ogun to Ogbomoso through a 76.7kilometre road providing a vital link between the two zones. The Ibarapa axis of the state is not left behind in the road revolution with the reawarded contract for the reconstruction of the 58kilometres Omi Adio- Iddo-Eruwa Road.

The Igboora-Igangan-Iganna Road is receiving attention while the reconstruction of the Isaba – Ogundoyin road, Eruwa, is currently ongoing. With all these noble efforts, a solid plan is already in place for the speedy expansion of Oyo State socio economic development and stable political life.

Kudos must be given to Governor Makinde and his resourceful management team for being focused, determined and responsible, and for managing the available resources for the maximum benefit of the people of the state.

The government remains focused on  its four cardinal pillars, which are health, education, security, agriculture and economic expansion through agric business and infrastructure development. “The secret of our success as an administration is that we did not come into government without a plan.

As you may be aware, when we were going round the state to canvass votes, we had consultations with different segments of the society and we came up with a policy document known as the Oyo state Roadmap for Accelerated Development, 2019-2023. So, we knew what we wanted to accomplish.

I am happy that you are all seeing a modern Oyo State develop before your very eyes; an Oyo State where no zone is left behind in our development plan; an Oyo State that we can all be proud of,” Governor Makinde once told a media house.

This journalist appreciates the Omoluabi spirit of Mr. Governor in upholding his promises that all uncompleted projects which as strategic to the development of the state will be considered and completed. As Governor Makinde noted: “We have continued to stick to our plan, to make Oyo State the proof that good governance is possible in Nigeria. We have embarked on an infrastructure revolution across the state that will make people say, once again, that they are proud of our state.”

By way of advice, I would want the administration to consult private sector operators on how to improve solid minerals development and tourism due to their comparative advantage. These sectors can jack up the Internally Generated Revenue (IGR) of the state tremendously. Then, the administration must remain absolutely focused on moving the state from poverty into prosperity.

Makinde, FNSE, is a friend of the masses. He is always willing to sacrifice time and money for others without seeking any material again. He is very patient, listening and approachable as a civil administrator.

Opinion polls reveals vividly that Oyo State people are proud of his noble achievements and he deserve the best from the people in terms of quality following. He got the CCII National Merit Award, the SWAN (Oyo State) Gold Merit Awardee and FRCN (Ibadan) “Astute Politician of the year 2018” awards for assisting the underprivileged in the society.

No doubt, Governor Makinde is a tested, committed and steadfast player. His plan is to bring progress and development to people of Oyo State. End of story. As we mark May 29, let us collectively strive to subscribe to dialogue and avail ourselves of all peaceful democratic channels through which our opinions as well as grievances can find worthy expression. I commend the executive, legislature and judiciary for their effective roles in sustaining our democratic journey in the PaceSetter state.

Ayangabyi, JP, is a journalist and media consultant