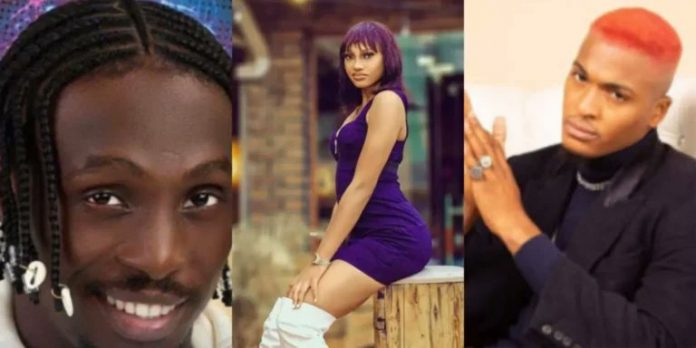 Big Brother Naija housemate, Eloswag has revealed he broke down in tears after the Saturday night party.

Eloswag told Adekunle on Sunday that he cried because Chomzy hurt him.

Recall that Eloswag had expressed interest in having a relationship with Chiomzy.

However, Chiomzy after the party confided in Sheggz that she likes Groovy.

She said Groovy is her kind of guy and she has a crush on him.

Eloswag said, “Last Night I cried in the restroom downstairs when I saw Groovy and Chomzy.”

“I broke my glasses, I was so hurt because she lied to me. When we came upstairs, I heard her tell Sheggz that she liked Groovy,” he told Adekunle

Meanwhile, Groovy was last week engaged in a heated argument with his lover Beauty for dancing with Chiomzy.

An enraged Beauty had received two strikes after the incident, leading to her disqualification from the reality show.

In other news, after the Saturday Night Party, Big Brother Naija Housemate, Chomzy, said no to Hermes who has been expressing his feelings for her.

Hermes, who approached her after the Saturday night party to know why she turned him down but still plays happily with other male housemates like Eloswag, and Dotun who asked her out in the house, was left heartbroken after Chiomzy walked out on him without listening to what he had to say.

Responding, Chiomzy told him that she said no everyone else that asked her out except Eloswag whom she likes and is bonding with.