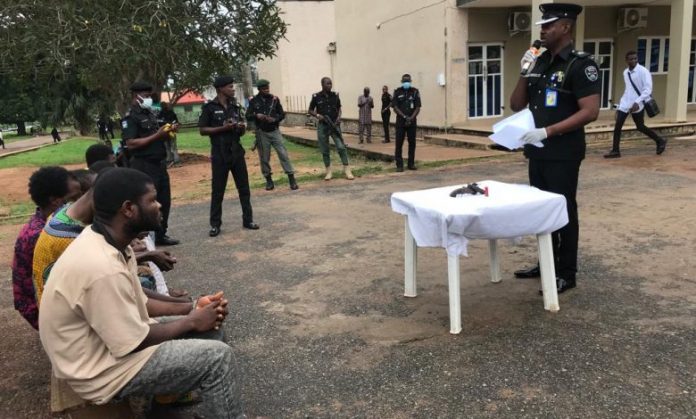 Oyo state police command in its effort towards curbing crimes across all the geo-political zones of the state has on Monday paraded a suspected kidnap kingpin who wrote a notification letters to one new generation bank and one private university in Oyo town informing them of their attempt to rob and kidnap students of the institution for ransom.

In his address at the Command’s Headquarters Eleyele Ibadan, the state commissioner of Police, CP. Adebowale Williams stressed that the suspected kidnap kingpin, one Olarinde Adekunle, aged 37, a member of a notorious kidnapping syndicate sent an ‘’Hand-Written” note to the management of one Private University in Oyo town wherein they threatened to abduct three of its students should the management fail to pay-up (N10,000,000) Ten Million Naira within a stipulated period was arrested based on intelligent investigations by men and officers of the command.

The suspect, Olarinde Adekunle was paraded alongside seven other armed robbery suspects that have been terrorizing POS Operators in Oyo town and traders plying Igbedu Oyo/Iseyin/Iwo Axis.

CP. Adebowale also noted that the kidnap kingpin has also wrote a notification letter to authorities of one new generation bank in Owode area of Oyo town with an intention to gang-rob them today Monday, 15th August 2022 before his arrest.

Briefing journalists on behalf of the state Commissioner, the state police public relations officer, SP. Adewale Osifeso said that “the Oyo State Police Command under the astute and dynamic leadership of CP Adebowale Williams psc(+) fdc is resolute in making the State undesirable and inhabitable for criminally minded and other unscrupulous elements with the adoption of distinctive and multifaceted crime tackling approach premised on improved communal partnerships and technology aided inquiries.

“Unrelenting with sustaining the relative tranquility enjoyed in the State through its continuous proactive policing approach and swift dispensation of justice, the Command’s monitoring unit has intercepted a kidnap mastermind whose mode of operation is to run detailed background checks on unsuspected victims and then inform them through writing of his intentions to abduct them unless a stipulated amount of money could be sourced and paid to him.”

“Preliminary Investigations as thus revealed that on Thursday 11/08/2022 at about 0800hrs, members of a notorious kidnapping syndicate sent an ‘’Hand-Written” note to the management of a Private University Institution, in Oyo town wherein they threatened to abduct three of its students should the management fail to pay-up (N10,000,000) Ten Million Naira within a stipulated period.”

“The threat as expected, disrupted academic activities within the University, stirring up panic and uncertainty among the university community. Basking under the euphoria of what they presumed was a successful scheme, and blinded with greed, they decided to extend a similar (hand-written) notification to a branch office of a New Generation Bank within Owode Area, Oyo with the intentions of invading it later in the week.”

“Consequent upon the above, discreet forensic based investigations were carried out and this led to the arrest of one Azeez Mufutau ‘M’ whose phone numbers were inscribed on the ‘’Hand-written notes’’ sent to the both the school management and bank. Upon questioning, the suspect confirmed that the phone number on the Note was his but denied being the author of the document.

The investigation further led to the arrest of one Olarinde Adekunle ‘M’ age 37yrs who confessed as to being the author the hand-written notes under scrutiny and added that Azeez Mufutau ‘m’ was used as a decoy for the purpose of concealing his direct involvement.Investigation is now in progress and further developments will be communicated accordingly.

Exhibits recovered from the suspect is one techno mobile phone, a well laid out Oyo state map that identified the targeted areas, and a notification letter written to university authority.

Speaking with journalists, the suspect, Olarinde Adekunle confirmed to have written the letter but said he didn’t mean to abduct the student but to threat one Azeez who according to him was owing him N20,000.He said, ‘I wrote the letter to the threat Azeez who was owing me 20,000, I don’t even know what came over me that led me to such action, I demanded the sum of N10m in my letter and I used the phone number of Azeez to rope him with the crime.

The vice chancellor of the university, who pleaded anonymous commended officers of the Oyo state police command for their swiftness over the matter.

Exhibits recovered from the suspected armed robbers are one double barrel locally made gun, one live cartridge, one Mazda Bus, one Toyota Corolla car with registration number SMK 330 FD.

CP. Adebowale while parading the suspects maintained that on 23/07/2022 at about 2030hrs, some members of a notorious armed robbery syndicate who have been terrorizing members of the public in Oyo town invaded the shop of one Abass Taiwo ‘m’ where he operates Mobile Banking Services and her business activities. The notorious hoodlums who were armed to the teeth attacked Abass Taiwo, dispossessing him of huge proceeds from his Point of Sale ‘’POS’’ Machine, ten different mobile phones belonging his customers and some other valuable items at a gun point.

The CP also noted the victim immediately raised alarm while the hoodlums were fleeing from the scene of crime, which caught the attention of the valiant operatives of the Command’s Monitoring Unit who were on intelligence led patrol in the area. Consequent upon the above, one of the robbers who later identified himself as IBRAHIM OLUSOLA ‘m’ was apprehended.

He said, “Upon interrogations, the suspect confessed to the crime and series of similar criminal activities he had masterminded with his fleeing syndicate members. He equally gave useful information which later led to the identification, tracking and eventual arrest of his criminal gang members from their various hideouts while the syndicate kingpin, Opeyemi Segun Aka Omo Jesu was arrested in the Federal Capital Territory, Abuja.

Opeyemi Segun, AKA Omo Jesu confessed to have led the operation of Igbedu Oyo/Iseyin road where some traders were dispossessed of their valuables worth millions of niara among other various criminal activities in the state.