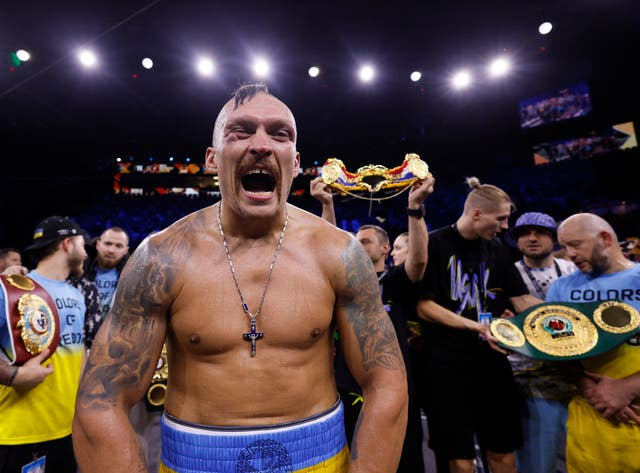 There have been many different Anthony Joshuas over the years. There has been Anthony Joshua the model, the businessman, the Olympian, the juggernaut, the impostor.

So, which was the version marauding around the ring in Jeddah on Saturday night, microphone in hand, beaten but bellowing of passion, respect, and war?

The sharp jawline was there, just a little more mobile than usual. The pragmatic mind must have been there, if somewhat rattled within his skull. The Team GB logo was present, inked onto the Briton’s bruised skin, underneath the sticky sweat. As it was, every Joshua was accounted for on this Saudi summer night. All plus this possessed, perturbed version.

The 32-year-old’s career has been crafted carefully over the years, his public image as chiseled as his physique. The problems have arisen when anyone other than Joshua or promoter Eddie Hearn has held the chisel. Take Oleksandr Usyk, for example. Eleven months ago, he chipped away at the juggernaut until cracks appeared and the shell shattered, leaving Joshua the supposed impostor standing beaten and bemused in London.

Almost a year on, Usyk employed the same tools in Jeddah in a bid to retain the heavyweight belts that he had wrestled from “AJ” with a comprehensive decision win last September. Once again, those tools chipped away at Joshua the juggernaut.

To be clear, the “impostor” tag has always been an unfair label for Joshua, who has genuine skill and an impressive resumé, but when you attract the general public and less-involved fans, you will also attract such reckless dismissal. In any case, even an improved Joshua could not shrug that tag off his Herculean shoulders on this long-awaited evening, as he fell to a second decision defeat by Usyk.

The pair’s main event began with Joshua jabbing to the body, looking to expose perhaps the only slight weakness that Usyk has ever exhibited. The Briton added straight rights, but Usyk responded in kind, changing levels while staying light on his feet. Joshua found success with hooks to the body in Round 2, while mirroring the champion’s lateral movement in an atttemptt to reduce the elusiveness that had frustrated him last September.

Usyk floated from side to side like a spectre, however, and spooked Joshua with straight southpaw lefts that crept through the Briton’s guard as the bout sped towards its halfway mark. Joshua, clad in black trunks as he was for much of his run as a heavyweight contender, went in search of the uppercuts that have historically dealt such damage for him, but they were out of reach – just like the awkward foe across from him.

Unlike in the pair’s first fight, however, AJ was able to channel his frustration, timing spiteful uppercuts into the mid-section of the shorter Usyk, who complained that one such punch was below the belt. A brutality was brewing, the kind lacking in London’s edition of this clash. Usyk, who was so emotionless and clinical eleven months ago, burrowed leather into Joshua’s body, as if irked by the Briton’s own attacks. The Ukrainian also showed the speed that was so effective for him last year, deftly carving sharp angles and compiling combinations, though Joshua remained alert with a stubborn guard.

Joshua maintained forward pressure but, beginning to drain in the humid arena, was not supplementing that movement with enough output, and Usyk again established his left cross – stinging the plodding former champion. The plods gave way to slips, with the referee pausing the action in Round 8 to have the canvas wiped dry. Joshua continued to target the body of Usyk, unleashing a swift, four-punch salvo later in the frame, though Usyk continued to one-up him with slicker, cleaner offence.

Joshua, overcome by urgency in Round 9, began to put together the combinations that he was too hesitant to pursue in London, pummeling Usyk’s midriff with horrid hooks and testing the 35-year-old’s guard, too. The Ukrainian was retreating, wobbling but not quite wilting, as the round concluded.

An irritated Usyk did what he had done so well in the first fight, arresting momentum just when Joshua looked to have grasped some of his own. The Ukrainian winged hooks into the cheeks of Joshua, who had been standing in front of Usyk like an obelisk and began to teeter, spitting out saliva. Somehow, Joshua managed to catch Usyk with a counter right hook in the middle of a flurry by the champion, and the southpaw appeared to have been shaken to his core.

But, again, Usyk exhibited his resolve, twitching, feinting, then overwhelming Joshua with vitriol and volume. A left uppercut and right hook snapped back the head of Joshua late in the frame, with the Briton again running out of answers and resolve as the championship rounds arrived.

Desperately in need of a finish, Joshua stalked Usyk in the final moments, but the Ukrainian took the Briton’s best shots and spat punches back with venom, no doubt spurred on by the will to give his under-siege compatriots something, anything to celebrate.

And – where they can, for as long as they can – they will celebrate in Ukraine. For after the final bell had sounded, Joshua helped his rival to hoist the Ukrainian flag, moments before the scorecards were revealed – moments before Usyk was again declared a decision victor over Joshua.