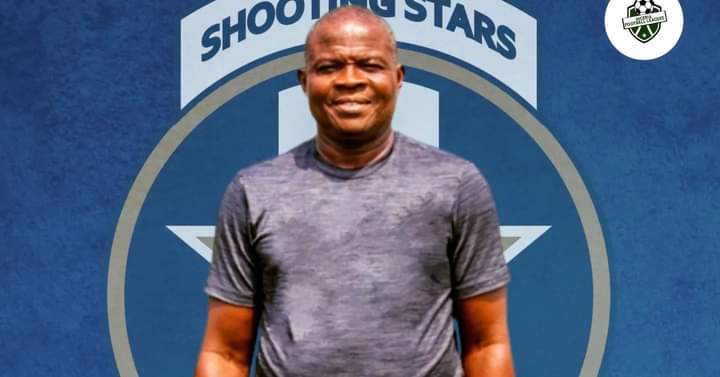 Ogunbote takes charge from Edith Agoye, who resigned at the end of last season.

The experienced tactician left another NPFL side, Remo Stars early this month after the expiration of his one-year contract.

It is the third time Ogunbote will be managing the Oluyole Warriors. He has also handled top clubs like Sunshine Stars, Enyimba, and Enugu Rangers in the NPFL.

Speaking at the ceremony, the Chairman of the club, Mr Babatunde Olaniyan charged the new coach to bring the glory of the club back and make the team very competitive next season.

He said the dream of the governor has always been to see the old glory of Shooting Stars restored and the Club ranks among the best in the Nigeria Professional League and in the continent of Africa.

Olaniyan disclosed that the management is conscious of the expectations of the Governor and the fans of the Club and, this is why they decided to engage the services of Coach Gbenga Ogunbote.

“This is a very Senior Coach with vast experience of the Nigeria you are all aware, Coach Gbenga Ogunbote is one of the finest coaches that Nigeria has produced. He has impacted and still impacting Nigeria Football, footballers and administration.

“He has guided many Clubs to victories, triumphs and successes in his coaching career. His most recent was with Remo Stars FC which he led to pick a continental ticket just within a season.

“We as Management believe that, with the support of all stakeholders here present, Coach Gbenga Ogunbote would be able to replicate his winning streaks and sterling performances by making Shooting Stars very competitive next season and, ultimately, picking a continental ticket for the Club at the end 2021/2022 football Season.”

In his response, Ogunbote promise to deliver while calling for support of everyone so as to deliver and make the team to reckon with in the following NPFL new season.