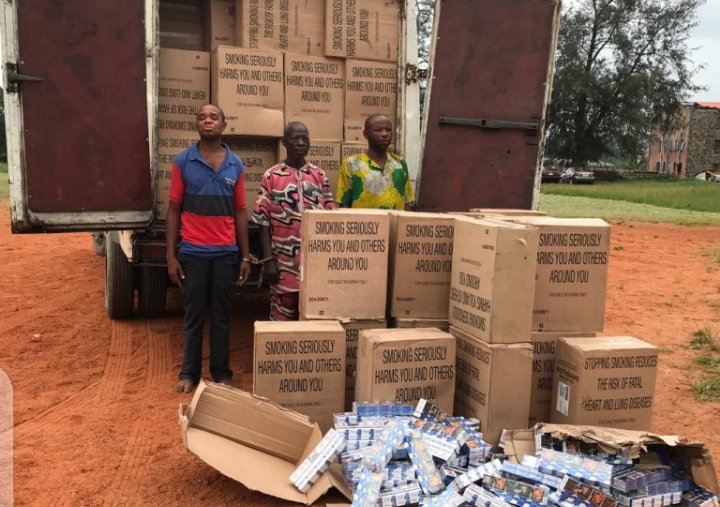 The Oyo state Police Command yesterday paraded three suspected smugglers in an attempt to deliver the truck load of cigarettes suspected to have been hijacked and diverted by some assailants suspected to be working with a criminal syndicate, to its receiver.

The suspects are Umaru Sunday age 36, Itoh John age 45, and Peju Okanlawon all male. The suspects were allegedly found in possession of a total 270 Cartons of Cigarettes.

Umaru Sunday and Itoh John were the firdt to be arrested on August 16 before further investigation led to the arrest of Peju Okanlawon who have all since been taken into police custody.

The Oyo state Police Public Relation Officer (PPRO), SP Adewale Osifeso who addressed the press on behalf of the Commissioner of Police, CP Adebowale Williams on 22 August at the Command headquarters in Eleyele said, Operatives of the state Command swung into action upon obtaining credible intelligence about activities of the suspects at the Lagos-Ibadan Toll Gate.

“At about 1600hrs, on 16/08/2022, information was received by operatives of the Command attached to the Monitoring Unit while on intelligence based anti-crime patrol at Toll Gate area that a truck loaded with Cigarettes suspected to have been hijacked and diverted by some unknown hoodlums was sighted where the hoodlums were waiting for their criminal receivers at TOLL Gate area, Ibadan.

“In furtherance of the above, the team of operatives immediately swung into action and intercepted (2) Two suspects UMARU SUNDAY ‘M’ and ITOH JOHN ‘ in Possession of (150)One Hundred and Fifty cartons of Cigarette .

“Further investigation led to the arrest of another suspect, PEJU OKANLAWON ‘m’ from whom another (120) One Hundred and Twenty Cartons of the Cigarette were recovered in Lagos State.

“Upon interrogations, the suspect confessed to have assisted the hijackers to move the diverted goods to their criminal receivers in Ibadan where they were arrested.

“Preliminary investigation revealed that the hijacked truck and the goods belong to a Tobacco Company located in Ibadan and the management of the company has confirmed the missing consignment.

“Lastly, the Commissioner of Police, Oyo State Police Command, CP Adebowale Williams psc (+) fdc enjoins members of the public to continue cooperating with officers and men of the Command while in discharging their duties and to be unrelenting with providing credible and timely information capable of nipping crime in the bud at all times.” The Oyo Police Commissioner said.

While fielding questions from journalists, the suspects have since confessed to aiding the suspected hijackers to transport the truck load of cigarettes.

SP Osifeso however, said the police is already intensifying investigation and its dragnet to apprehend others in connection with the the crime while assuring of prompt press update as further developments unfold.