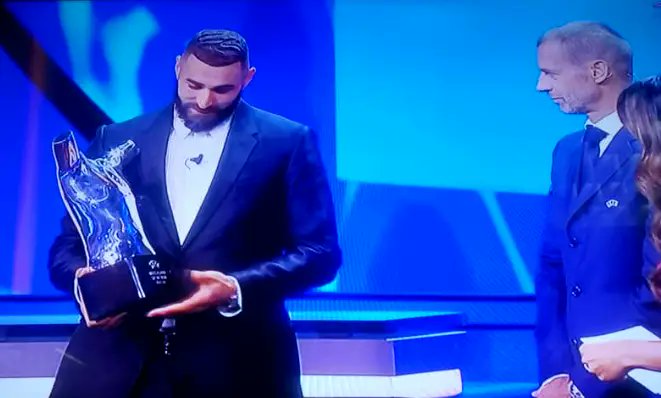 Karim Benzema has been named the UEFA Player of the Year.

The striker scored 14 goals last season to guide the Los Blancos to their 14th UCL silverware.

Both Benzema and his club, Real Madrid are excited about the recognition the Frenchman is receiving.

The two parties are also working on his contract extension and Real Madrid are expected to shortly announce its renewal until 2024.

All the club’s plans involve Benzema and the player feels strong enough to continue until that date. His body, mentality and total identification with Real Madrid have earned him this new contract.

Thirteen years ago, Benzema set off on a risky journey but always with Florentino Perez as his travelling companion.

The Real Madrid president boarded a plane to Lyon in search of a promising footballer and, from that point on, he has not left Benzema on his own for a single moment.

If anyone has believed in and stood up for Benzema, it has been none other than the Real Madrid president.

He has often done so against the opinion of coaches, directors and fans. Perez was there to support him in difficult moments and always continued to trust the France international.

Now, Benzema has become a world-class player, sharing the limelight with the Champions League draw.