“I’m A Jim Ovia Boy, I Deliberately Wore Sneakers To The NBA To Mock (sic) At Them”—Shettima 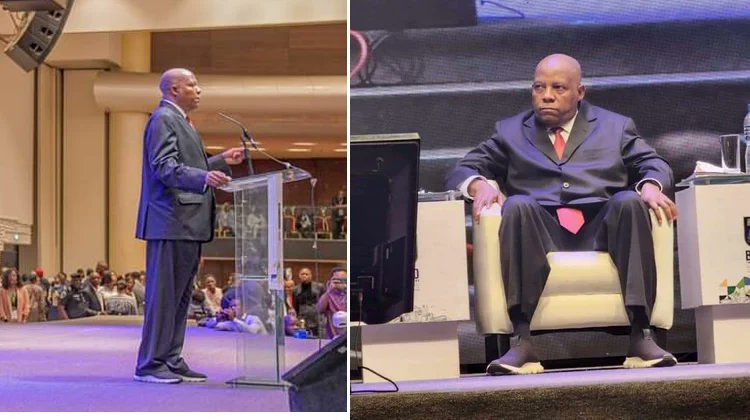 The All Progressives Congress vice-presidential candidate, Kashim Shettima, has explained why he wore sneakers to the Nigerian Bar Association Conference in Lagos State on Monday.

Shettima, who represented APC presidential candidate, Bola Tinubu, at the event, was dressed in a black suit and red tie, accompanied by a pair of gym shoes, which stirred reactions from social media users.

The event was attended by the presidential candidates of the Peoples Democratic Party, Atiku Abubakar and Labour Party, Peter Obi, respectively.

But justifying his style in a video clip shared on social media on Thursday, Shettima, who is a former Borno State governor, stated that he deliberately wore sneakers to the event.

“I was in Lagos for the NBA conference. It was held in Eko Hotels, it was largely funded by the Lagos State Government, the APC government of Lagos State. Subsequently, they moved to Eko Atlantic city, a product of an idea conceived by Asiwaju Bola Ahmed Tinubu.

“When I sent my recce team… One of the presidential candidates, his team held meetings for three consecutive nights to commit mischief.

“When I was told it was a hostile crowd. I’m a banker, trained by one of the best bankers in the world. I’m a Jim Ovia boy. I deliberately wore sneakers to the NBA to mock (sic) at them.”

Speaking at the NBA conference, Shettima had said when elected, he and the APC presidential candidate will replicate the achievements recorded by Tinubu in Lagos.

He said, “Nigerians have the capability to see through the worn-out rhetoric and sophistry of pretentious politicians.”

“Nigerians should follow the man wey know the road. From day one, we will hit the ground running. We’ll promptly address the issue of the economy, ecology, and security.

“And we have the antecedents. I built some of the best schools in Nigeria. Go to Borno and see wonders; you will never believe that it is a state in a state of war.

“So, we are going to replicate our achievements in Lagos, in Borno and some of the frontline states so that our nation will be a better place. The fundamental issue is pure leadership.”