Osinbajo, Lawan, Amaechi, 19 Others To Unite For Tinubu 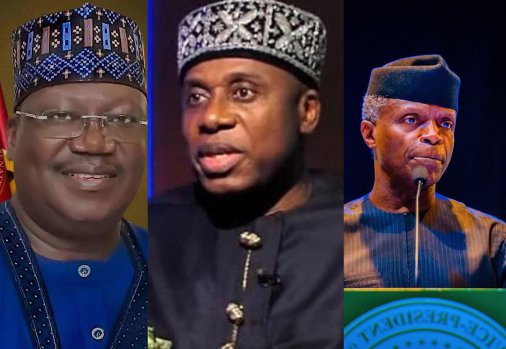 •Ex-APC presidential aspirants to meet in Abuja next week

Twenty-two former presidential aspirants of the All Progressives Congress (APC) are to unite for the party’s presidential standard bearer, Asiwaju Bola Tinubu, it was learnt yesterday.

They have scheduled a meeting for next Wednesday in Abuja to strategise on how Tinubu will win the February poll next year.

Their decision to rally behind the party’s candidate is coming about six months before the election slated for February 28, 2023.

One of the aspirants, Dr. Nicolas Felix, dropped the hint in a statement issued yesterday by his Media Office in Abuja.

The statement reads: “The special invitation to the strategic meeting of all 2023 APC presidential aspirants, which will be held at Transcorp Hilton in Abuja, on Wednesday, August 31, 2022, by 2 pm is to brainstorm on adopting winning campaign strategies that will carry every Nigerian along and address the challenges bedevilling our country.”

Tinubu polled 1,271 votes to clinch the APC ticket. He was trailed by Amaechi and Prof. Osinbajo who scored 316 and 235 votes.

The political activities for the 2023 general election gained more steam in Yobe State yesterday with the inauguration of the Presidential Campaign Office for Bola Ahmed Tinubu/Kashim Shettima in Damaturu.

The expansive office is located on the ever-busy Maiduguri Road in Damaturu.

Buni said: “I’m really impressed with what I saw in terms of preparations and organisations of the campaign structure here in Yobe State.

“Though the ban on the campaign has not been lifted, I am highly impressed with the level of preparation that I have seen on the ground here.”

According to him, voters in the state will not waste their ballot on any other political party apart from the APC.

He said: “Yobe is APC and APC is Yobe. So, our people are on board and we are soliciting their support as usual. We are not taking them for granted.

“We will ensure that we reach out to all nooks and crannies of the state to ensure victory for APC, Isha Allah.”

On hand to entertain guests at the event were Yoruba and Igbo cultural dancers.