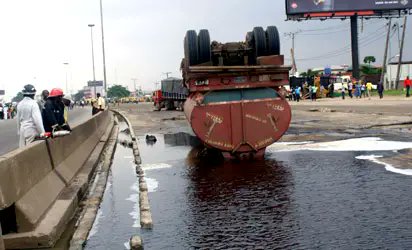 THERE was palpable fear, on Friday in Ibadan, Oyo State, as some residents and area boys within Idi-Ose community defied warning against possible explosion to scoop petroleum product at the scene of a fallen tanker.

The incident which occurred at Distance Learning, Idi-Ose Bus Stop, on new Ibadan/Oyo express-way in Akinyele Local Government area of the state, when the tanker, laden with 33,000 litres petrol, overturned and fell by the road side.

Eyewitnesses told Saturday Vanguard that despite the presence of security operatives and the Fire Service officials, they ignored the advice to stop scooping the fuel until the arrival of the Western Nigeria Security Network, WNSN, codenamed Amotekun, who sent them away and took over the situation.