Nigerian Celebrity Entertainers Who Have Relocated Their Families Abroad 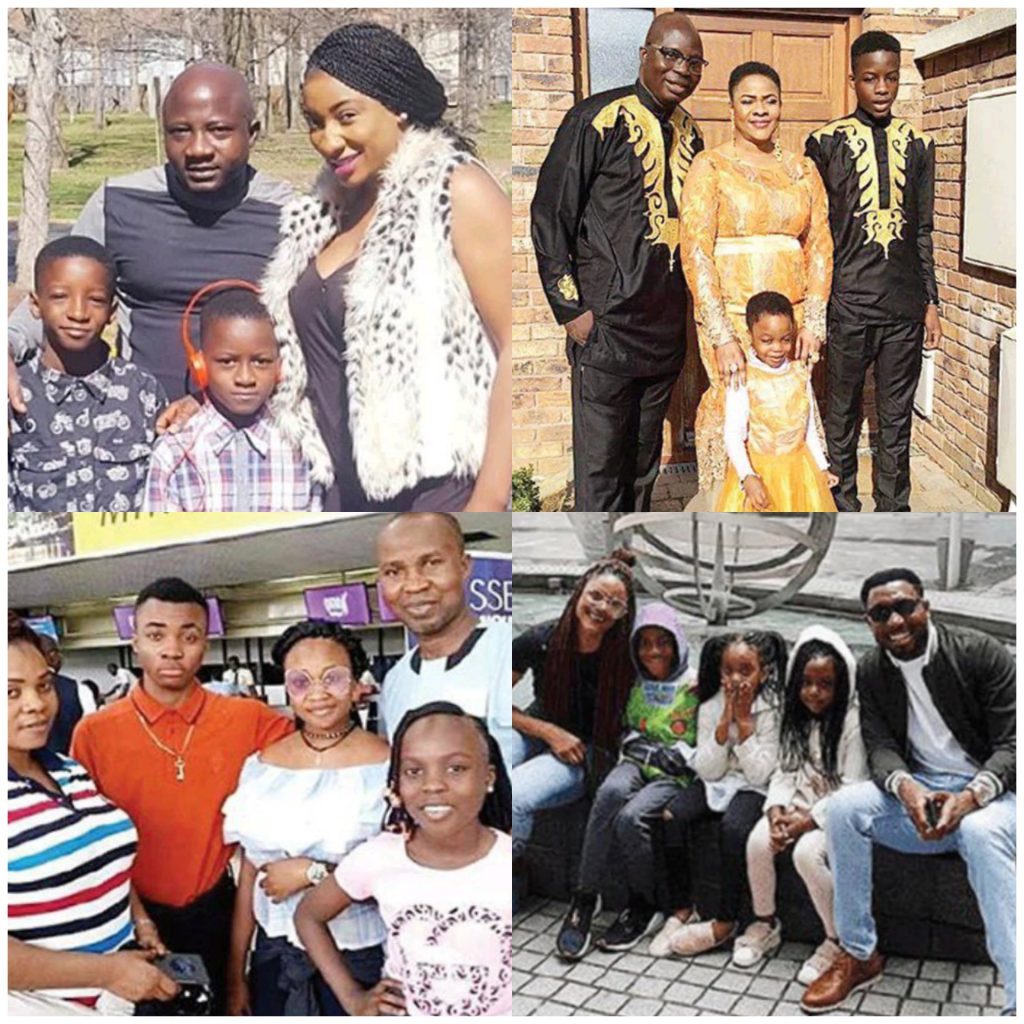 Earlier in the year, Timi had joked that barely that Hallel had developed an accent barely two weeks after resuming school in her new country of residence.

In recent times, many Nigerians have emigrated from the country, with many more planning to ‘japa’. Apparently, entertainers are not exempt from this. Saturday Beats takes a look at entertainers who still live and work in Nigeria but whose families are abroad.

Majorly because of the comedic roles he plays in movies, many people don’t seem to take actor, Olaniyi Afonja, aka Sanyeri, serious. However, despite his on-screen antics, Sanyeri is one man who has been intentional about raising his family and exposing them to opportunities.

His beautiful wife, Omolara, and their two sons— Boluwatife and Olasunkanmi—are based in Canada.

In a video which surfaced on the Internet some months ago, many Nigerians were excited by the foreign accent of the children. That was especially so because their father mainly speaks in Yoruba, and cuts the picture of one who has never even travelled outside the country. In the video, the kids urged fans to subscribe to their father’s YouTube channel and other social media accounts.

Explaining what fatherhood means to him, Sanyeri said in an earlier interview, “Fatherhood means being the head of the home, a husband to a wife, a father to children and fulfilling the obligations and responsibilities that are expected of a man to his wife and children.”

Speaking on how he felt when he welcomed his first child, the actor said, “There is nothing so special about one having a first child. For someone who needs a child and has a wife, when God gives them the gift of the first child, they will be happy and full of joy. Children are gifts and those who get them should be grateful.

“I believe that the best investment I can make in life is for my children to be successful. I cannot jeopardise their future for anything. Either I have much or otherwise, I will do everything within my capacity to ensure that my children will not have any cause in the future to abuse me or describe me as an irresponsible father.”

In an earlier interview with Sunday PUNCH, the actor had stated that he was so poor when he married his wife that the only thing he had to his name were his tribal marks. However, they stuck with him, and over the years, he has grown to become a prominent actor and filmmaker.

Actor, Bolaji Amusan, aka Mr Latin, is another comic actor that is loved by many. Though based in Abeokuta, Ogun State, Mr Latin’s wife, Ronke, and children (a son and daughter) live in Dublin, Ireland.

Mr Latin married Ronke in 1999 and their relationship has continued to blossom over the years.

The actor, who is the current President of the Theatre Arts and Movie Practitioners Association of Nigeria, is particularly fond of his wife and he makes no secret about that.

Speaking on why he decided for his family to stay abroad, he said in an interview some years ago, “It was the idea of the two of us. There was a long strike by teachers at a time and we thought such would not give our children what we really wanted for them. We decided to relocate but because of the nature of my job, I cannot stay over there with them.”

On how they have been coping with a long-distance relationship, Latin said, “We speak almost 10 times every day. I wake them up with telephone calls in the morning to speak with my wife and children till they are off to school. We also chat on WhatsApp and have video calls almost every day. I visit them as well, and they come to Nigeria too.”

Even without speaking, actor, Wale Akorede, aka Okunnu, send his fans reeling with laughter because of his funny mannerisms. Though he started his acting career in 1984, it wasn’t until some years later, that he started getting the much needed recognition in the industry.

However, despite the carefree character he usually portrays in movies, Okunnu does not joke with the welfare of his family.

His wife, Wumi, and three kids— Jumoke, Hassan and Modupe— are based in Canada. At a time, the actor also used to live in Saudi Arabia, but he returned to Nigeria after a while.

Speaking on why he left Saudi Arabia, he had said, “Yes, there was a point my life when I relocated to Saudi Arabia, but after giving it a second thought, I realised there is no place like home. Nigeria is my country and no matter the challenges (here), we just have to make it work. I don’t regret coming back to my country.”

However, though his family lives outside the country, Okunnu is not immune from the hardship in Nigeria. In a social media rant some months ago, the actor lamented the sorry state of the country. Speaking in Yoruba, he said, “If we keep watching and don’t speak up, it is because we don’t want to things to spoil. Nigeria is bad. Whether men, women, children or elderly people; all those who have a hand in making the nation what it is today, their lives will also be bad from generation to generation.

“The country is really in a bad condition. I can’t say there is a particular sector that is working optimally. If we cannot enjoy our country as citizens, then we’re like foreigners.”

Sharing his thoughts on why many celebrity marriages don’t stand the test of time, he said in the same interview, “Marriage is not something one jumps into. One needs to pray well and be sure because it is for life. Any marriage can collapse and it is not only celebrity marriages that don’t last. People talk about marriages of celebrities because they are famous people.”

Timi Dakolo’s voice is one that has melted the hearts of many over the years. married to a photographer, Busola, and blessed with three children— Alexander, Zoe and Hallel— their marriage has had its fair share of trials. Recall that in 2019, Busola had accused a popular pastor, Biodun Fatoyinbo, of raping her many years ago in Kwara State. Though Fatoyinbo was eventually cleared by the courts, Busola and Timi maintain that the deed actually happen.

Though they seem to have moved from that episode, several feelers suggest that Busola and the children have relocated to the United Kingdom. Busola is said to be attending a university in the UK to further her education. The children are also said to have started attending school there.

Earlier in the year, Timi had joked that barely that Hallel had developed an accent barely two weeks after resuming school in her new country of residence.

Recall that some time ago, Timi paid them a surprise visit. A video posted on social media showed how excited his family was at seeing him without prior notice.