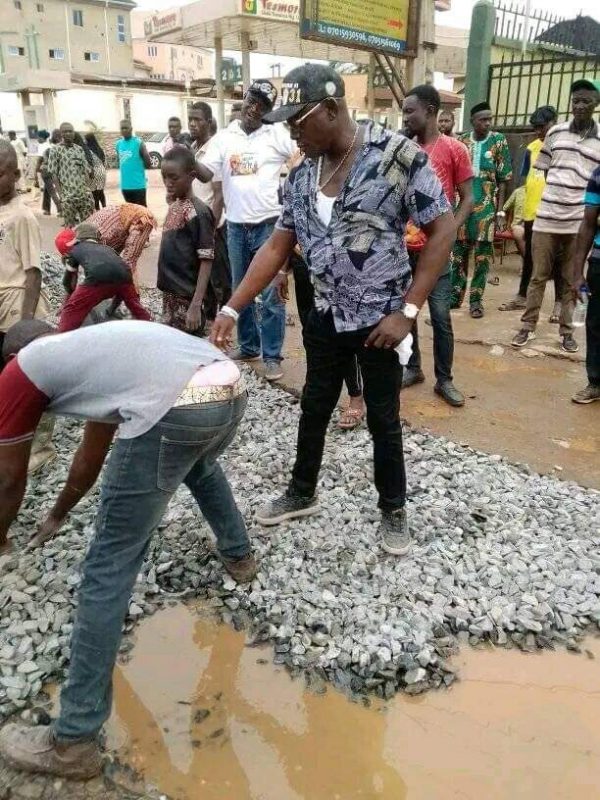 The Chairman Disciplinary Committee of Oyo State Park Management System (PMS), Alhaji Mukaila Lamidi (Auxiliary) has brought smiles on the faces of Wofun Olodo road residents, as he embarked on rehabilitating the roads which have become terrible and unmotorable.

The PMS boss and his team extended the road rehabilitation and filling of potholes initiative to Manatan, Iyana Church, Wofun,Oki and Olodo road on Wednesday.

A resident said, “The initiative is a very well meaningful developmental project that means a lot to the people living within the environment as they all know the terrible condition of the road. It’s too damaged and worse due to mismanagement and lack of maintenance by the community”.

The PMS Spokesperson, Hon. Qudus Moyosore said the development was individually and voluntarily sponsored from Auxiliary’s pocket to support Oyo State government under the umbrella of PDP, in moving Oyo State forward because the road is a major road that links to various parts of Ibadan and Oyo State.

“All the motorists using the road both commercials and private owners are praising Baba Auxillary for the good job well done and they also praise Oyo State Park Management System PMS members for giving their best to the community”, another resident said.