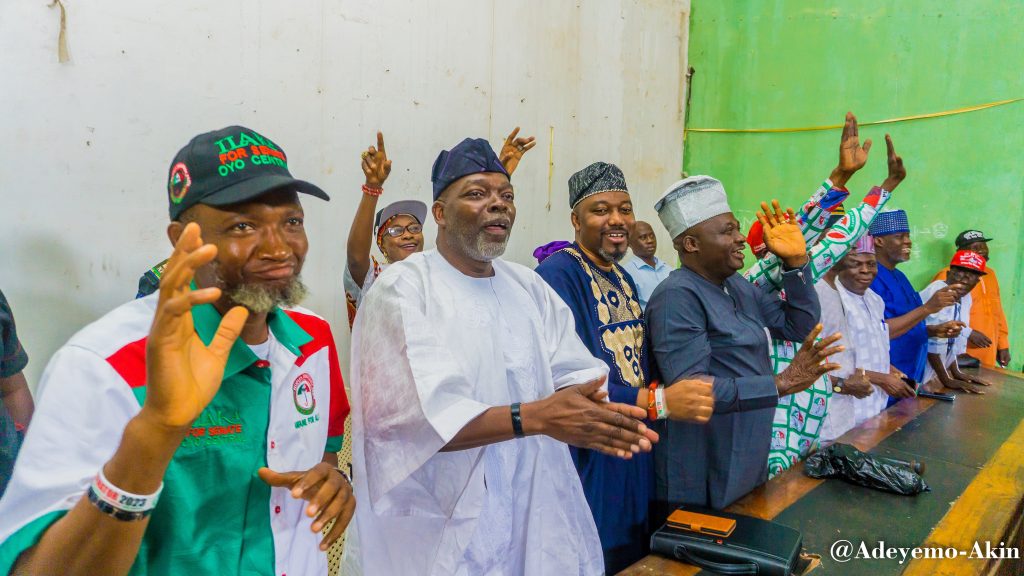 As the 2023 elections draws near the People’s Democratic Party’s candidate for Oyo Central Senatorial Zone Chief Luqman Oyebisi Ilaka Wednesday visited Afijio and Egbeda local government areas where he held strategic meetings with Party leaders and stakeholders, where he again received support and assurances from Party leaders and other relevant stakeholders who reiterated their support for Ilaka, ahead the February general elections.

Speaking on behalf of leaders in Afijio, the People’s Democratic Party chairman, Hon. Aderinola Adedeji affirmed that all Leaders, stakeholders and members of the Party are ready to work for not just the victory of Ilaka, but also for the other candidates of the Party with total commitment.

According to him, life is incomplete without quality leadership which every community  relied on, Ilaka is a renowned name in Oyo federal constituency, added. He described him as a strong-willed man who can be trusted with power, stressing that the people of Afijio are ready to rally round his aspiration.

Also, the executive chairman of Afijio local government, Hon Sunday Akindele Ojo (SAO) described the former Chief of Staff to Oyo State Governor as a man of integrity and a thorough Oyo son who deserves all the support needed to achieve his senatorial goal, while noting that Chief Bisi Ilaka was eminently qualified to be a Senator of the federal republic of Nigeria. He assured Ilaka and his entourage that Afijio will deliver and intensify more efforts in the council area to get outstanding votes for Ilaka who is also the Ladilu of Oyo kingdom. He called on Party members and critical stakeholders to work for the victory of all PDP Candidates.

Equally, in Egbeda local government, the Deputy Director General for Seyi Makinde’s re-election campaign in Oyo central Senatorial district, Hon. Ezekiel Temitope aka O’tope echoed the acknowledgement of the stakeholders on the outstanding qualities of the senatorial candidate, whom he described as an experienced democrat.

The highlight of the meeting at Egbeda local government was handing over of the APC decampees to the party. O’tope assured the new members of justice and fairness as they have the same right as the old members.

PDP Candidate for Egbeda/Onaara, federal constituency Hon Busari Olayemi remarked that he appreciates the decampees for taking a bold step at this crucial time.

In his separate remarks, the Oyo born Politician, Chief Bisi Ilaka thanked Afijio and Egbeda party Leaders, and other stakeholders for demonstration of loyalty, solidarity and good spirit. He, therefore, used the opportunity to admonished all party faithfuls in the state to remain steadfast and loyal to the Party, adding that PDP is the only political party capable of offering good governance to Nigerians.

He further urged critical stakeholders of the party to come together so as to have a convincing result in 2023. He admonished them to continue uniting the party, speak in one voice and canvass vote for PDP across board.