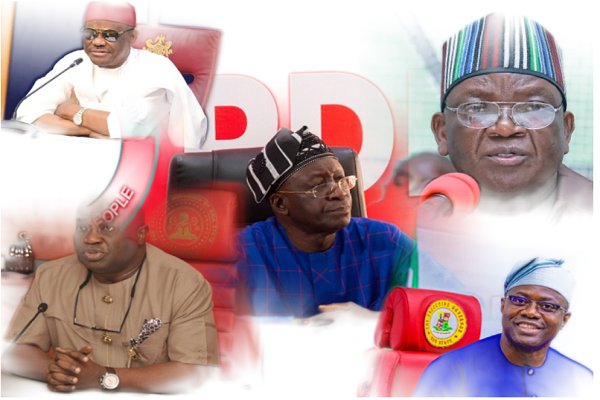 The crisis that has hit the Peoples Democratic Party (PDP) escalated yesterday as the National Chairman, Dr. Iyorchia Ayu, drew the battle line with aggrieved chieftains calling for his resignation.

In 1999, when Ayu was a minister in the cabinet of ex-President Olusegun Obasanjo, Rivers State Governor Nyesom Wike was the chairman of Obio Akpor Local Government Area in Rivers State.

Ayu had earlier served as Senate President from 1992 and 1993 when Wike was a law student at the Rivers State University of Science and Technology, Port Harcourt.

party demanding his sack, led by Wike, the chairman said he will not quit.

He insisted that he has a four-year mandate, adding that he has not spent a year in office.

Ayu said his fate was not tied to the presidential candidate, Atiku Abubakar, because he was a product of the party’s constitution.

However, Wike said he cannot be intimidated by anyone in the PDP.

He said Rivers will soon decide on the 2023 elections.

Ayu opened up for the first time on the protracted crisis in an interview with the British Broadcasting Corporation (BBC) Hausa Service.

He said the leaders of the party will not allow any individual to destabilise it.

Ayu said: “I was voted as PDP chairman for a four-year tenure and I’m yet to complete a year.

“Atiku’s victory doesn’t affect the chairman’s position. I won my election based on our party’s constitution.

“I didn’t commit any offence; I’m only reforming the party. So, I’m not bothered by all the noises.

“I know I’m doing my work and I didn’t steal any money. So, I see no reason for all these talks.

“When we started PDP, these children were not around. They are children who do not know why we formed the party.

“We will not allow any individual to destabilise our party.”

Wike: get ready for decision
Wike, who spoke yesterday during the flag-off of Igwuruta road construction in Ikwere Local Government Area, told the crowd to get ready for an important decision soon.

The governor said Rivers would soon take a decision and declare its position on next year’s election.

He said Rivers’ votes would no longer be acquired freely, adding that those interested in the state’s support must make an acceptable offer to its people.

He said: “Nobody should come and deceive you. No amount of social media war against us can solve any problem.

“Anybody who wants our votes must tell us what is there for us. Our vote is no longer for dash. It is for you to tell us what you will give to us.

“The God of confusion will put confusion in them. They think it is Rivers State that they are doing. They are doing themselves. They will see confusion from now to the end until they withdraw and understand that there was no road there.”

Wike lambasted a certain Southsouth leader of the party for his remarks in Kano State two days ago, describing the individual as a betrayer.

He said: “Two days ago, I was watching television. One person, who said he is one of the leaders of the Southsouth, opened his mouth in Kano, saying all kinds of things. I shook my head. If this is the kind of father I would have, let me not have a father.

“We should take one day for fasting and pray for their forgiveness because with what I have seen they are almost doomed.

Wike, who thrilled his audience with songs and dance steps to mock his detractors, said confusion would continue among them until they retraced their steps.

The governor spoke about plans by some former generals in the party, who claimed to have links with the CIA (America’s Central Intelligence Agency), to threaten and cow him into doing their bidding.

He said: “Some people threatened that they were former generals and they are close to the CIA in America, they can deal with us.

“I say, listen, if you are close to the American CIA, why don’t you use it to solve the Boko Haram problem? Is it my body you will use it?

“Use that contact and solve Nigerian problems. You want to use it to threaten me, who are you? I should come and do your own bidding, I will not do that.

“I will do the biddings of Nigerians not the biddings of a few individuals who believe that if they are not there, it is their children; no other person’s child should come up. So let us all prepare. A day shall come and Rivers State will take a decision on what to do.”

The governor asked the Independent National Electoral Commission (INEC) to make good on its promise of conducting free and fair elections in 2023.

He commended President Muhammadu Buhari for promising not to interfere in the elections.

“If they (INEC) keep to their promises that Nigeria will get a better election, I will be happy. Everybody will see with their eyes. Abuja does not vote. It is the people here that will vote.

“I thank Mr. President for promising not to interfere in the election. I thank him that he wants to leave a legacy of conducting a free and fair election,” he said.

Speaking about the project, Wike said it was a promise he made to the people of Igwuruta, describing good governance as the capacity to bring basic amenities that would change the fortunes of the people.

He said: “What is good governance? The people of Igwuruta are happy. You can see the smile on their faces, that is good governance, bringing basic infrastructures, and basic amenities that will change their lives. We came and pleaded with you to vote for us and you voted for us. It is our own turn to fulfil our promise.”

Wike said since the colonial masters, no government had paid attention to the community despite its economic contributions to the country and the state.

He said: “The youths should make sure nobody disturbs the contractor. Don’t go and begin to demand things that will make the contractor abandon the job. The contractor should also engage the youths.”

Commissioning the construction of the internal roads expected to be completed within six months, the Abia State Governor, Okezie Ikpeazu, said it was the second time he would be invited by the governor for a similar assignment.

Describing Wike as a flagship governor, Ikpeazu said it was rare to see a governor inaugurating and commissioning projects a few months before the end of his tenure.

He asked his colleague not to be distracted by the activities of his detractors, who had continued to attack him despite, fulfilling all his promises.

He said: “It is time in Nigeria we focused on the message and not the messenger. If you don’t like Nyesom Wike, ponder a little and ask, is there substance in what he is saying?

“For many years, we have focused on the messenger and at times we followed messengers without a good message.

“Time has come to listen to the dictates of the message and not focus attention on the messenger because many people preach what they are not.”