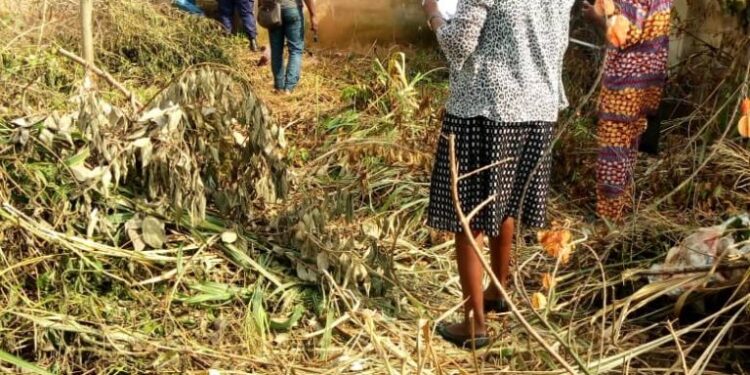 The remnants of a decomposed body of an unidentified man found in the bedroom of his house after four years, has left residents of Apete in Ibadan in shock.

The deceased whose identity remain unknown as at press time was said to have been seen by neighbours four years ago during one of his occasional trip to Ibadan from Portharcourt in Rivers State where he resides at the time.

The cause of his death is yet to be acertained but residents in the area told CityMirrorNews that non of the residents in the area knew about the incident until this week when the community decided to enter into the compound to cut the overgrown grass inside his compound which has become a haven for snakes and rodents.

It was gathered that the Abokis who were contracted for the job of cutting the grass in the deceased compound were told to jump into the compound since the gate of the house were locked from behind only for them to found out that the car of the house owner is in the premises and has been covered with grass.

According to eyewitness , after managing to cut down the bush , they peeped at the window of the building and saw the skeleton of the decomposed corpse on his bed with a phone in his hand.

Officers of the oyo state police command are currently carrying out a comprehensive investigation into the incident. .